Just in case you can't get out tonight: Fireworks!! 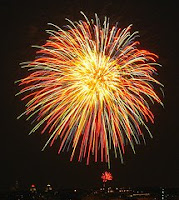 I was up early this morning and just decided to re-read the Declaration of Independence. It's short and to the point, just like a good newspaper article. If you have a few minutes today before the family and friends arrive and the hot dogs and hamburgers are on the grill you might want to read it again too. There's a complete copy here.
Happy 4th!
Posted by Jim of L-Town at 7:36 AM 2 comments:

Crain's Bill Shea has pointed give-and-take with another journalist

Found this column by Crain's blogger Bill Shea on some Michigan Citizen charges against the Detroit Free Press and its coverage of soon-to-be former Detroit Councilperson Monica Conyers.

The story is one thing, but the comments back and forth between Bill and the subject of his story is also good reading.
Posted by Jim of L-Town at 11:27 AM 4 comments:

The Washington Post's John Kelly has an interesting column on the exodus of many of his co-workers to a buyout at the WaPo.

If you are not a registered member of the WaPo's online community, you will likely have to sign up. Easy and free.
Posted by Jim of L-Town at 11:08 AM 2 comments:

Mother Jones: The death of newspapers

Lots of great facts and links.
Posted by Jim of L-Town at 4:46 PM No comments:

Grand Rapids Press sports writer David Mayo, now a convicted felon for a marijuana cultivation is getting his old job back at the Press. This on the same day many of his fellow employees are on the way out.

Apparently police found more than 200 marijuana plants growing at the Mayo home, but he pleaded to a lesser crime. The 200 plants were for "personal use." That's a lot of personal use.

Mayo seems to be drawing as much ire over his lawyer's comment about his "humiliating" experience as a waiter as his drug use. Many of the long thread of comments are pretty brutal.

Some of the commenters appear to be Booth employees (anonymously) poking fun at the company's "zero tolerance" drug policy.

For my part, I believe everyone deserves a second chance, but it does raise some questions about how serious Booth is over its employee drug policy.
Posted by Jim of L-Town at 4:20 PM 5 comments:

Here are the "highlights" of the AnnArbor.com presentation at the Ignite (whatever the heck that is) last night. I guess you get five minutes and a few slides (which I couldn't or didn't see on the video) to tell your exciting story.

With our frequent trips to Buffalo we are as in touch with New York politics as we are with Michigan politics.

For a month now, nothing has gotten done as neither side is now able to get a quorom and because the former Democrat governor stepped down after his "Appalachian Trail" incident with a paid hooker there is no lieutenant governor to break the tie.

Important legislation is on hold and will expire in just a few days, leaving cities across the state without money for projects that would bring badly needed jobs to this state.

The new governor, Paterson (who had to admit a number of his own dalliances after he ascended to the office), has pleaded with his fellow Democrats to find a way to share power and get things done, but they are in no mood to compromise and today tried to hold a vote by using a blocked hallway that forced one Republican to cut through the Senate floor.

When the Republican cut through the chamber on a short cut back to his office, the Democrats declared a quorom, hastily passed a bunch of legislation, but the governor said he was not going to sign the bill because of the shenanigans.

Although they don't want to meet, the Senators are being called into special session everyday by the governor, which they promptly adjourn without doing anything.

Now there is a move by voters and others to cut off the Senators' pay because none of them seem to want to work anyway. It's all very funny and ridiculous at the same time.
Posted by Jim of L-Town at 5:17 PM No comments:

Made in China: Riiiiight!

Let's keep handing over our manufacturing and money to China. They do so well after all. For example this little apartment complex project. Here's the Reuters story and photo.

The People's Paradise is not so concerned with the details.

How confident will the residents of the nearby duplicate buildings feel?
Posted by Jim of L-Town at 4:10 PM 1 comment:

I'm not one who should necessarily point out the typos of another, although the readers here are 'helpful' in pointing them out, but because of a comment on a story posted on the Flint Journal Mlive site it may be instructive of the lack of editing of stories before they go online.

Here's the paragraph (in case it gets fixed later):

"It said the districted needed to better use technology in the classroom and do a better intregrate new students in the cirriculum."

If my math is any good at all that's three misspellings in one sentence. I should acknowledge that I didn't find this on my own, it was sent to me offline to my e-mail.
Posted by Jim of L-Town at 9:56 AM 8 comments:

If you go to the Flint Journal's MLive opinion page you will see a column of photos and column links down the right side.

The Opinion blogs are pretty much up to date and the community newspapers columns are relatively fresh, but if you click on any of the photos in columnists' column you will find they are anywhere from five weeks to seven months old.

Heck, some of the people listed there don't even work for the Journal anymore. One of the columns has to do with encouraging voters to get more information on candidates before the early May City election.

The sell by date of a column should be close to that of a carton of milk. What did they do with the former Internet team?
Posted by Jim of L-Town at 7:25 AM No comments:

As I mentioned before, I hate playing golf, but like watching and following it.

I previously wrote about Flushing golfer Jeff Roth who was not getting much attention at a recent Michigan tournament from his hometown newspaper.

So little did I know that this week here in New York, Jeff Roth started out a PGA Champions Tour event near the top of the leaderboard at the Dick's Sporting Goods Open tournament. He shot a 6-under par, 66, during the first round of the tournament.

By Sunday he slipped to being tied for 31st with a 7-under par finish. Don't believe this was mentioned at the Flint Journal. I couldn't find it anyway. Here's the complete leaderboard.
Posted by Jim of L-Town at 4:27 PM No comments:

Who says you can't make a living blogging? The AnnArbor.com just announced the selection of a blogging leader. Edward Vielmetti is a sometime commenter here. He has always been positive and respectful here so we congratulate him on his new job.

While the article does not say how much a blogging leader will be paid, it might be a nice touch if Edward would tell us so we would have some idea what our future would hold should we decide to become a full time blogging leader.

After all, there's a lot of unemployed writers out there trying to figure out how to cash in on this Internet deal.
Posted by Jim of L-Town at 1:41 PM 8 comments:

Hint for husbands: From now on it will not be a good idea to tell your wife you are going for a 5-day walk on the Appalachian Trail. (Even if you really were).

Update (9:25 p.m.) After I posted this someone sent me this column, which I promise you I did not see before I left my "Thought for the Day," otherwise I would have credited it.
Posted by Jim of L-Town at 8:43 PM 1 comment:

A long time Grand Rapids columnist wins prestigious award as he takes the money and runs. And that is NOT a criticism of the writer as he joins a large number of us who have bailed with the buyout.
Posted by Jim of L-Town at 6:11 PM No comments:

For infomercial fans, this is right up there with Michael Jackson. I'm sure my stepdaughter, who loves infomercials is in mourning.
Posted by Jim of L-Town at 2:05 PM 5 comments:

A courtroom brawl worth posting.

There was an interesting story on the Flint Journal MLive site about a murder suspect who was attacked in court by the family of the victim during a hearing this week. The family was outraged when the defendant entered court with a big smile on his face for the hearing. All of this was captured on courtroom security video. A 3-minute version with sound (the melee starts about a minute or so into the video) is on the MLive site.

The Flint Journal has the entire version here.

(Notice the woman toward the end of the video that is crawling her way to safety across the courtroom floor. What's that about?)

The FJ Editor checks in about the changes

The editor of the Flint Journal has checked in with an evaluation of the first month of the "new" Flint Journal. (Maybe they will fix them by the time you read this, but what are those wierd symbols that frequently pop up in MLive copy? They have had that issue since the beginning, you would think they could have worked that annoying glitch out by now.)

It's long on feel good and short on numbers. If a reporter wrote this story the editor would have them go back and ask a few questions.

How many subscribers did you gain or lose in this change?

How's the advertising revenue holding up with the change?

How's that transition to online advertising working to keep the wolf away from the door?

What have the people who have called to cancel their subscriptions been saying?

Where are all those great online videos we used to hear about for Mlive?

That would be a good start to actually make this column informative. As the old editor used to end every column of his: Let me know what you think.
Posted by Jim of L-Town at 7:42 AM 9 comments: