If this trend spreads to Michigan, it will not be good news for the Sunday revenue stream for daily newspapers. I know in my house the Sunday Vlassis coupons are one of the major reasons we still subscribe.
Posted by Jim of L-Town at 7:54 AM No comments:

So far no indication of any job losses at Muskegon or Ann Arbor in the latest round of layoffs at Booth, but monitoring of the State WARN site will continue.

The State site also lists duplicate reports under the separate headings of Booth and for The Grand Rapids Press. Not sure if that is a mistake or if the numbers are combined. The Booth listing has 55 layoffs and Grand Rapids lists 146 layoffs. So the total layoffs for the State are either 488 or 543. At this time I am unable to reconcile those two numbers.

Here's what I do know about editorial. Layoff notices to reporters (including sports) of all grades were as follows: Grand Rapids (15); Kalamazoo (6); Bay City (12); Flint Journal (12); Jackson (10); and Saginaw (6). That's a total of 61 reporter positions lost. Currently the MLive Media Group is advertising for 9 news reporters, but it is unknown if the individual ads for each paper represent just one job or a series of positions. There are listings for a "Sports Reporter - Engagement," whatever the heck that means and Ann Arbor is advertising for a "Sports Reporter - Buzz" which I guess means they are looking for some kind of bee.

Two of the reporter positions are for slots in Lansing and Detroit, which would seemingly be new positions, although Booth once had an active and full Lansing bureau.

Right now there are 81 job listings on the MLive Media Group site. Editorial accounts for a minor percentage of those positions right now.

A total of 12 editor positions were among those receiving layoff notices. It appears there will be one sports editor (or something akin to that) for the whole chain. That person is a former Michigan State sports info flak who apparently helped start a pro-MSU blog site. That will bode well for coverage for my alma mater, but not sure what credibility that will have with readers from that other school.

A total of 9 photographers received layoff notices in the chain.  Although already consolidated, it appears that 12 copy editors also received pink slips in this latest round.

There are also additional editorial losses from the layoffs of 7 "content specialists" in Bay City and 1 from the Flint Journal.

Many folks have contacted me and asked what I thought about what will be the number of new editorial jobs and starting salaries with the new company. The short and honest answer is that I have no idea.

But it seems clear that if the company wanted, it could have simply moved everyone over to the new company seamlessly at their current salary. So my speculation is that there will either be far fewer editorial positions at a comparable salary or more jobs (but less than now) at a reduced pay scale.

As folks apply for these positions and let me know what the pay scale is, I'll pass that along.

It appears the layoffs come from every department and many are folks who were hired in the wake of the first round of buyouts a few years ago. My focus here is on the editorial departments but feel free to review the documents through the links and send me your reflections on the non-editorial areas.
Posted by Jim of L-Town at 7:47 PM 5 comments:

An FFE reader sent this article along about another person's perspective on the Booth changes.
Posted by Jim of L-Town at 5:47 PM 1 comment:

When I get a chance later today I'll review the sheets and put together a more concise look at the editorial positions, but that will have to wait until tonight as we are in Buffalo taking care of family business today.

Here's the MLive story on the fancy new Grand Rapids digs for the MLive Media Group company.
Posted by Jim of L-Town at 1:17 PM 2 comments:

Here are the total layoffs as reported to the State for the Jackson Cit-Pat. I will post links (the link to the Grand Rapids corporate layoffs is broken) as they come. It is a total of 71 for the Jackson paper and many from the newsroom.

A total of 91 of the current 142 employees at the Flint Journal received the layoff notices. The positions lost are listed here.

Saginaw News is reporting 12 positions gone.
Posted by Jim of L-Town at 11:45 AM 3 comments:

Thanks to a FFE reader there is the first of what promises to be more WARN postings (this link, which worked yesterday is taking me to the page, but the information that was on there Monday is not on there today - the links to the information in the above posting still seems to be working) on the State website. So far Booth is reporting 82 Flint Journal employees received layoff notices and 55 Grand Rapids Press employees (a poster said those 55 employees are Booth corporate employees not Press employees) received layoff notices.

Previous layoff notices to the state were:

Obviously, these numbers do not include those who accepted buyout packages which certainly number in the hundreds.
Posted by Jim of L-Town at 5:37 PM 3 comments:

A couple folks, one here and one by e-mail have sent me this link to a Crain's in-depth article on the recent changes at Booth.

It's a pretty good look at what has transpired, although they, like me, can't get a handle on what the total layoffs are across the state.
Posted by Jim of L-Town at 4:18 PM 1 comment:

Flint news via blogspot by an 'old' pro

Thanks to an FFE reader I received a link to a blog by former(?) Channel 12 news reporter Cathy Shaffran who always did a professional job in her work for WJRT-TV.

I met Cathy on the street at crime and accident scenes and bumped into her (not literally) over the years on the police beat.

Hopefully she will make more money on her blog than I have on this one ($46 here so far, not even enough for Google to issue a check). She has some interesting breaking news from City Hall today.
Posted by Jim of L-Town at 9:40 AM 2 comments:

A friend of the blog - Kevin McKague - sent along the following newspaper correction: 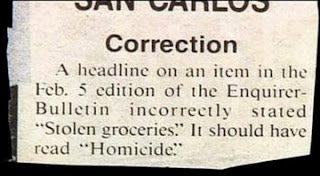 And as a point of reference I used to live very near to San Carlos, California where the Enquire-Bulletin is published.
Posted by Jim of L-Town at 8:47 AM No comments: