On their own: Former colleagues working on new ventures

Had a great lunch last week with some of my old Journal 'geezer' pals. Among those who came were Ron Krueger, the Journal's former premier food writer and critic. Ron is no longer with the paper, but is continuing to publish reviews on his new website "live2eat."

Stop by and visit and make your own suggestions and comments. I know Ron will appreciate the patronage.

Also, one of the Journal's finest photographers, Tom Cheek, who prowled the mean streets of Flint with me during the early part of my career there has his own website where he can be reached for photographic work. And, if you need photographic work, it would be hard to find someone better.
Posted by Jim of L-Town at 12:37 PM 5 comments:

This news story about the new Kalamazoo "hub" (this would be the new name for a newspaper office) is probably the first of many such articles around the state. I have a favorite paragraph (actually two) but I'll reserve them until I see what your favorites are.

Still no transparency on how many of the "77 laid off employees" will be included in the new hub.
Posted by Jim of L-Town at 12:22 PM 6 comments:

Media fails when reporting on itself: AJR

I'm posting a link to an article in AJR that talks about a particular pet peeve of mine: Why don't newspapers cover their own stories like they do every other business in town?  Thanks to an FFE reader for the link.

One of my favorite paragraphs in the long piece:

"My sense is that media organizations [in North America] are so financially anxious now that they want to please their audiences rather than inform them," Dvorkin says. "They want to be friends" with their readers and viewers. ONO's surveys suggest that having an ombudsman fosters great credibility among readers and audiences. "This is a very easy way to help restore confidence in the media," he says.
Posted by Jim of L-Town at 8:35 PM No comments:

MLive chosen are also abandoning ship, tidbits from the newsroom and pickets are gone 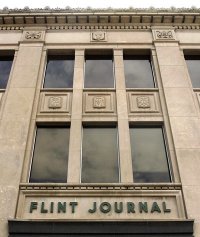 There are reports that one or more of those pegged to stay on for the transition from Booth to MLive Media Group may be abandoning ship along with those thrown overboard.

Word from some newsroom meetings on the west side of the state indicate that the circulation director for Grand Rapids, Kalamazoo and Muskegon, who was pegged to lead the distribution process for all the papers in the new structure has opted to depart rather than take the job, as did the assistant.

There are other reports which I am trying to flesh out about another top level person who was offered a post in the new company, but has chosen to leave.

Have also gotten reports that the new salary structure for reporters will be in the low 30s with cash incentives for meeting story quotas. It will be interesting to see what kind of journalism is produced when reporters have story count quotas that are connected to financial incentives.

Salary for experienced reporters at the papers just four years ago was in the low to mid 50s. Wonder what kind of salary reductions the bosses have taken? 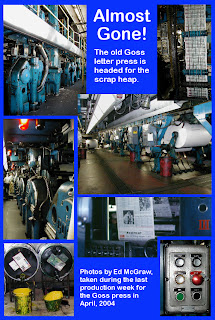 Just a follow up to the picket story from last week. Was downtown Flint today, even had my picture taken out in front of the current Journal building with a group of former employees (pictures to follow at a later date) and found that the pickets were no longer out in front of the Rowe Building.

We went into the Rowe building and found work ongoing in a relatively small first floor space that may be the new Journal offices.

Those old presses were like the building's heart beat. Not nearly as loud a heart beat as the old linotype machines, but there was just something about walking out the door on a Friday night, early Saturday morning and see the trucks lined up waiting for the first editions to come out the windows.

The future of the newspaper

Guess you won't need a big building, or an expensive printing press if the future of newspapers is what this video is proposing. Also, from the look of it, news won't be a requirement either.

I'm posting this "Destroyermen video here so it will be easily accessible to some of my shipmates from the USS Cogswell. Those of us who served in the tin can Navy share a bond that is hard to explain. As I find more Fletcher class destroyer videos I will also post them here.

Drove through downtown Flint this morning and there were "Shame on MLive" pickets in front of the Rowe Building, the planned new headquarters for the Flint Journal.

Did just a little crude reporting as I didn't have time for more and it appears the local union officials are upset that work being done on the offices for the newspaper is using a Grand Rapids electrical firm instead of a local union one.

Good start for the new company here in depressed Flint. If you know more, feel free to chime in. If I'd had my camera with me I would have taken a photo.
Posted by Jim of L-Town at 1:16 PM 5 comments: