Oakland University is advertising for an assistant professor of journalism. One of the requirements is that the candidate have a Ph.d. Oh pleeeeeeeze.
What today's journalism students really need is a crusty old veteran reporter no matter what her/his education to tell them to run like heck in the other direction from journalism.
In all good conscience how can journalism schools continue to crank out folks who stand to make, what, $28,000 a year with little or no benefits.
Whenever I did a high school career day, the first question I asked was how many of the students were good at math. A few hands always went up.
Then I would stun them with a strong suggestion that they forget journalism, go into medicine or a related science field and do themselves and society a big favor by fixing people or discovering a cure for the myriad of diseases that ail us.
How does one get a Ph.d in journalism these days. Probably by writing sophisticated tomes on why newspapers and print journalism is in the tank.
Posted by Jim of L-Town at 5:21 PM 4 comments:

From a new journalism job-seeker:

From some anonymous "angry journalists":

From a researcher about "journalist burnout"

And if you have high-speed this is a good watch:


Interesting reads and viewing all.....
Posted by Jim of L-Town at 9:36 AM No comments: 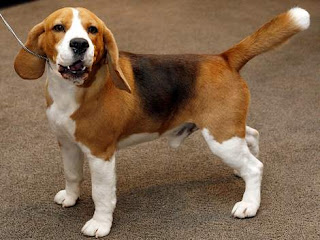 I was excited to see Uno, the 15-inch beagle win the WKC show last night.

For those who know me it was a reminder of my life with "Puppy" a stray female beagle I found while walking in 1989.

Puppy, who still has the longevity record of a female living with me, had to be euthanized more than two years ago and is still greatly missed.

Beagles are pure love and devotion and if, that's a big if, we were ever to consider getting another dog, I would lobby hard for a beagle. Joan would certainly lobby as hard for a Labrador retriever, which I must admit are pretty loving and devoted as well. (We had to put down "Colby" last fall after her failing health required an end to her 16 years.

So I really appreciate the WKC recognizing a "real" dog as Best in Show. Puppy will also be my Best (dog) in Life.

As for the longevity record it looks good, the God Lord willing, that Joan will surpass that in just another 6 years.
Posted by Jim of L-Town at 12:22 PM No comments: Yep, I've had a lot of time to think and that's always a dangerous thing.
While I watch the demise of the business that I have (had) such a great passion for it came to me that the solution was never in getting rid of the most experienced talented members of the profession. I know, well, duuuuuh!
Hang with me a moment.
The real problem with top newspaper management is they lack, dare I say completely, any vision for what is really required in salvaging not just the business, but the mission of community journalism.
After all, when the newspapers are all gone, who will do the investigative reporting, such as is currently going on in Detroit. The short answer is, no one. With no watchdog, those who sneer at the daily news media will be begging for the return of real journalism.
Wouldn't the better model for saving newspapers - either in print or online - have been in keeping the most talented reporters and editors and finding a way of transferring what people love, enjoy and need from the print version and transfer it to online editions.
Part of that problem is that some of the current editors (as I've posted her previously) don't really care about the news that most people really want to read. They turn up their noses at breaking police and fire news in favor of long, boring features. I've gone over this ad nausem so I'll not do it again here.
Now the business is faced with transferring its model from print to online, but without many of the folks who had a complete understanding and sources to actually make the transfer without losing the core aspects of the business.
Short sighted people saw only high salaries and benefits as the obstacle to saving the business. Wrong! Businesses rarely cut the way to success. Newspapers often tell businesses it is more important to part with advertising dollars in the bad times than when times are good. Guess they were giving that advice with fingers crossed.
Lost are the relationships built up over decades of reporting with key players in government and business. Those are relationships that will not be easily or quickly bridged with young, inexperienced reporters fresh out of college. This is in no way a slam at them it is just the reality that learning the reporting business is a long, not short, curve experience.
So now editors, who were barely competent to produce a printed newspaper, are playing the equivalent of pin-the-tail-on-the-donkey as they stumble in the dark trying to figure out how to make money on the Internet.
Heck, they were already playing the "donkey" game with the printed version of the paper and doing a miserable job of it. Now they are trying to transfer that to a medium they know little or nothing about.
Before it's too late, some newspaper needs to take a chance, keep its most talented people, and work to make the online newspapers a place that folks are eager to visit and that advertisers will recognize the benefits of spending money on while preserving the printed version for the legions of folks that still love that form of news.
During one brainstorming session at the Journal, some of us argued that the printed version could be supplemented on the Internet by giving readers a place to go to read the volumes of documents that often go into making investigative stories. Example: In stories about restaurant inspections, there is no room in the print version for complete copies and files that went into drafting the story.
Online, however, all the background documentation could be offered for readers who want to look further than a 30-inch story. We were patted on the head, told it was a good idea, but still no such move to provide that kind of service to readers. It would work for a variety of investigative stories.
Instead, the current management will continue to spin around, stumble and put the donkey's tail right square in its forehead.
Sad, very sad.
Posted by Jim of L-Town at 7:51 AM 4 comments: