Going to the airport for Joan and I is always an adventure. Joan has a titanium knee and I have a common name that has me listed on the "terror watch list."

Because of my status we are unable to use the electronic check-in and because of Joan's knee there is always an extensive search at the TSA screening area.

We always plan on an extra hour to get us both through security.

Yet, despite all that a guy with an explosive device strapped to his body somehow gets through foreign security and tries to detonate the explosive on a plane near Detroit. And according to early reports is on the "terror watch list" just like me.

You have to wonder if this may have been an early attempt to try to thwart security measures that were inadvertently published on the Internet just a few weeks ago. That TSA security publication provided a complete road map to our country's security measures.

We are not being well served by the agencies that are paid billions to keep us safe. While our local Congress representatives score Homeland Security funds to buy fire trucks for rural fire departments far from the fight against terrorism, we have security lapses that leave you scratching your head.

Those agencies are going to have to ramp up their security when KSM is brought from Gitmo to stand trial and another 100 terrorists are brought to an Illinois prison.

How confident am I in our current security measures to protect us? Not very much.

"I hope the investigators in the Detroit airplane terror incident are careful not to hurt or deprive this Nigerian citizen of his hard earned American civil rights in an effort to find out if further attacks are planned over this busy holiday travel period. Wouldn't want to offend the young man or deprive him of his fr...ee lawyer and right to remain silent. Glad he is getting the best free health care available."
Posted by Jim of L-Town at 7:30 AM 2 comments:

Mary did you know?

No offense Donny Osmond, I love Elin's version better, but I don't have a video so we'll use yours.

Merry Christmas! It's a simple story

It really is this simple.

Christmas was always an exciting time when I was a boy. Like most American children I anxiously waited, sometimes unable to sleep, sometimes up at 4 a.m. on Christmas morning to see what "Santa" had dropped off.

In 1966 and 1967 I spent Christmas at sea in the U.S. Navy, the first time I was not at home. It was a sad and lonely time filled with feelings of emptiness.

Later when I worked for two California police departments, Christmas Eve and Christmas Day often meant going to work, which also had a feeling of emptiness and being away from those you loved.

As a reporter, I often volunteered to work Christmas Eve and Christmas Day (Thanksgiving, too) so younger folks with families could stay home. (OK, the triple-time pay was a magnet as well).

The holiday murders and mayhem have a tendency to take the edge off the holiday however. (One Christmas Eve in Flint I covered a murder-suicide, a homicide and the next day another homicide).

So now that I am semi-retired and able to have these special days off, I truly appreciate them. It will be a quiet Christmas Day, just Joan and I, but we have some special visitors (John, Nicole and the two grandchildren, Addisen and newcomer Griffen) coming this afternoon for Christmas Eve dinner.

We miss our two sons, William and Timothy in California, and daughter, Elin, who is working in Boston. Granddaughter Brittany in California will also be missed. We will see our California children and grandchild in February, but we miss them all at this special time of year.

Our thoughts are also with those we lost this year, my brother, Mike, and Joan's Dad, Red. As much as holidays are a special happy time, they can be sad reminders of those not still with us.

My thoughts also turn to those standing the wall, those in the military, those serving in police deparments and fire departments who will be on watch for the rest of us on this special day. We thank those serving in ambulance companies and in hospitals, as well.

I hope you will stop for a moment and be grateful for their service to us and to our country. I know I already have. It's lonely on Christmas in a far off place and the least we can all do is stop and give them a thought.

For those on watch in patrol cars or in fire houses we also extend our thanks for their sacrifices.

As to the blog, I have a series of special YouTube videos on auto pilot going up tonight, but I encourage you to spend your time with family and friends and not here.

Straight No Chaser is back with the Christmas Can Can:

An inside look at the fancy lobby of AnnArbor.com is part of this Santa letter-writing contest event.

Maybe I'm not understanding the contest, but according to the story and photo slides only five children participated in a Santa letter writing contest?

Either the contest was very limited or AnnArbor.com is not reaching the young folks in the community. According to AnnArbor.com the participation was so limited they couldn't even hold a contest and instead awarded the grand prize to all five entrants.

That was nice of them, but someone in corporate must be wondering where all the people are?

When the Journal would sponsor holiday coloring contests, they were inundated with entries.

But it's not good to go against Santa, so Merry Christmas, AnnArbor.com
Posted by Jim of L-Town at 8:03 AM 1 comment:

"A loyal reader" asked me to make my monthly visit to AnnArbor.com and give some thoughts on a minor redesign there.

So I stopped by today, top story is about the pay raises and freezes involving the U-M administration.

I guess I think the "Top Stories" lead box looks a little better than what was there, but the site continues to be as exciting as watching cement dry.

Wonder if they will let everyone know how the subscriptions to the new paper are going?

Basically the site remains a big yawn, at least for me.
Posted by Jim of L-Town at 9:02 PM 3 comments:

Only after they are dead, though

Today there were several news stories about a new study that will be done in Boston on the brains of National Football League players.

The reporter added the following: "But only after they are dead."

Thank goodness for that.
Posted by Jim of L-Town at 6:18 PM 3 comments:

New LED traffic lights save energy, not so much lives

The unintended consequence of using LED lights to save energy in traffic lights is having a down side, including the death of one woman.

I've got an idea, they could string some of those coiled heating units people use to melt snow on their roof and melt the ice that way. Might defeat the old energy savings realized by the LEDs though.

My science teacher wife laughs every time she hears people touting the new electric cars or hyrid vehicles. She points out that when you plug the car in to recharge the energy, that electricity has to be made somewhere, often with coal, oil and if you live in Buffalo the more earth friendly water turbines.

Of course, nuclear would be a cleaner solution for producing energy, but no one wants to talk about that any more.

We are one of those energy conserving homes with the new bulbs. I don't like the light they put out and from what I hear, if you break one you then have a mercury emergency to deal with.

Just to let you know, if I break one they'll be no hazmat situation, because I will brave the mercury spill, sweep up the mess and throw it into the garbage. I think the earth, and I, will survive.
Posted by Jim of L-Town at 9:01 PM 5 comments:

Feeling a little sorry for my Dad, but not feeling bad about little snow here 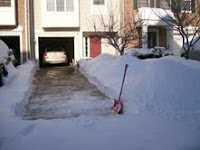 My 80-something Dad has been pushing a lot of snow lately. He's in great shape, so I'm not too worried, but it is a little bit of irony that he is shoveling like a demon at his townhouse near Washington, D.C. and up here in Michigan, I haven't even started my snowblower yet this season. I'm not complaining, though.
Posted by Jim of L-Town at 4:33 PM No comments:

Government Motors: When the bureaucrats take over marketing

Oh yeah, this proves that the government taking over GM was a really bad idea. Here's the new dance for the eco-friendly Chevrolet Volt. Makes you want to laugh, not buy.

(Update: I just re-read this piece after getting the first comment on it and decided to move it back to the top for the weekend. This was such a great look back and it prompted such a great comment I want folks to not miss this one. All my former Oakland Press and Flint Journal buddies will love this piece. Feel free to chime in with some of your great memories. There are some new posts below).

This is a great look, and good bye, to the newsrooms of old.

One of my favorite paragraphs in the whole story is this about newsroom bosses:


"Perhaps the prince of pranks was Jim Naughton, who in nearly 50 years moved from the Painesville, Ohio, Telegraph through the New York Times and Philadelphia Inquirer to the presidency of the Poynter Institute. "People who are always under pressure don't need bosses with whips," says Naughton, who once helped sneak a live camel into the Inquirer building. "They need bosses who understand the value of the collaborative spirit in a newsroom." That spirit drew "people who cared very much about what they did and its influence and impact on the life of the community."
Posted by Jim of L-Town at 4:58 AM 8 comments: