Cream has risen to the top

Good to hear from some fellow retirees and a few of those who still retain full and part-time employment at the Flint Journal.

I guess the editorial boss is now breathing a sigh of relief with the last of the old curmudgeons finally gone from his newsroom. In fact, he said as much in a recent meeting with the reporters left behind.
Although he didn't actually refer to us as pond scum, I heard he referred to some of us as "characters," but said now that we were gone what was left was the "cream of the crop."
One of my retired colleagues was offended by the comment, I simply thought it was funny and very typical of someone out-of-touch with the news gathering process. I mean what editor wouldn't relish the departure of many of the most experienced employees with decades of institutional experience in collecting news and writing stories.
And while many of the folks still at the FJ are fine reporters and great writers, even they know that some of the cream has left.
Heck, some of the people the top editor tried to convince to stay as part of the "cream," walked out the door not convinced that he and his lieutenants had the competence or horsepower to make things work. I guess they weren't "cream" after all.
Truth be known, some of those left behind only wish they had been in a position to take the buyout and escape.
That said, many of us have friends, good friends at the FJ and we do wish them well and hope that they can find the winning combination to return the paper to profitability and greatness. We simply remain skeptical that the generals leading them into the battle are up for the job. (There's a little cliche of my own).
On the happy side, the editor wants to raise morale and increase fun in the newsroom with big raises and overtime. That's was a joke, what is proposed to raise morale are regular potlucks.
Yeah, a good meatball, celery tray or cheese and cracker spread beats a pay raise and overtime any day.
One of my former colleagues called me to relate some of the above and mentioned that "Mattel" must be branded on the editor somewhere because there is simply too much "plastic" coming out of his office.
Don't know if I would go that far, but there is a certain element of being "out-of-touch." My model for an editor with integrity was the recent Los Angeles Times editor who told his bosses to stuff it when they ordered him to dismantle his newsroom and retired himself. Of course, the bosses found another person willing to sell his/her soul to do the dirty work of cleaning house, but at least the old editor kept his integrity intact. 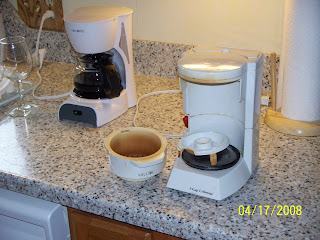 We all complain about poorly made products. But I've got to be honest today, we are putting out to pasture my still working Mr. Coffee four-cup coffee maker.

This is a coffee pot that I purchased in March 1995 after my second wife and I parted company. I went to Sears in Flint and in about 10 minutes purchased a new television, a vacuum cleaner, an alarm radio, a computer and the now soon-to-be-retired coffee pot.

Part of my hurry was that my editor at the time was sending me out of town to cover the capture of a young boy who had killed his twin brother the day before in Flint. I was in the process of moving out of the 2,000-square foot marital home into my 568-square foot apartment in Davison.

Time was short, but I needed to get up and running.

So, back to the $11 coffee pot, which by the way, survived by far all the other appliances I gobbled up that day.

So I did a little conservative math about my well used coffee pot, which was used virtually everyday and sometimes more than once:

And remember, we're not retiring it because it's broken, but because the cost of a new carafe (we just broke another one) is nearly the same as a new coffee pot.

So when you look at the picture above, say a little "wow" to some great American engineering and notice that the new pot in the background is also a Mr. Coffee. This time it cost $13.
Posted by Jim of L-Town at 3:50 PM 1 comment: 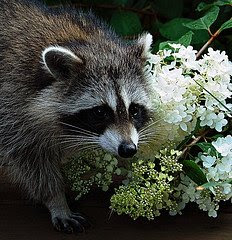 A persistent raccoon has my oldest son, William, a little on edge.
He asked me if any readers of my blog could help him with a non-lethal way to rid his small yard of a raccoon that continues to visit his back yard in Aptos, California.
I suggested picking it up, cuddling it and showing it some love, but he rejected that idea.
So if you have a favorite remedy for discouraging visits by raccoons please leave them on here.
Because William lives in a mobile home park, please do not suggest any solutions that involve weapons or love.
Thanks.
Posted by Jim of L-Town at 8:32 AM 9 comments:

A longtime acquaintance, Ray Hawks, current police chief of Capac in Michigan, was shot Wednesday while trying to arrest a man. A sheriff's deputy also suffered minor wounds.
Hawks is a longtime police officer who I knew during my five years as a reporter with the Oakland Press in Pontiac.
Hawks, who is reportedly in critical but stable condition, is now expected to survive and I just want to offer a little prayer for his complete recovery.
When I knew Ray in Pontiac he was a sergeant, and later a lieutenant, but one of those rare supervisors who never gave up being a street cop just because he was a supervisor.
Obviously, that love of street patrol never changed and he's still answering "routine" calls even as a chief. A few years ago we talked again after one of his former officers got entangled with a Lapeer County police officer who was dealing in steroid distribution.
After talking about the case at hand, Ray and I relived some of those wonderful years in Pontiac.
In my early days at the Oakland Press (1984) Ray often would let me ride with him during my off duty hours so I could learn the streets and see his job close up.
When I talk to journalism students I often recount those days and always suggest that any good cop reporter will learn about police work from inside the patrol car windshield to give them a little perspective on that job.
Often the media criticizes police, as it should, but frequently without the background or perspective of what the job is really like.
Because of my police service in the 1970s, I know how things look and sound inside a police car and believe any good reporter would want to learn that perspective before become an "expert" police reporter.
An incident that I frequently recount when I discuss the perils of "off-the-record" conversations was one that involved Hawks. This was 23 years ago and at his former job in Pontiac, so I'm sure Ray wouldn't mind me recounting it now. Besides the statute of limitations is long expired.
One of the first nights I rode with Ray, he told me if I was going to ride with him everything was off-the-record. This was for my experience only. I agreed to the conditions, eager to learn more about Pontiac and its police force.
At the time there had been a recent controversy over police firing warning shots over the heads of escaping suspects. The police chief at the time had forbidden the shots, and rightly so as they pose a significant risk to innocent bystanders.
About 2 a.m. Pontiac officers responded to a burglar alarm at an off-road vehicle warehouse on near Wide Track Drive. Ray responded to the scene as a back-up officers.
When we arrived one of the officers ran up to the driver's door of Hawks' patrol car and announced, "Sarge, I popped a round over one of the guys heads but he kept running."
Knowing I had heard the comment about the "warning shot" Ray turned away from the officer, looked me right in the eye and reminded me of my "off-the-record" pledge.
No one was hurt and Hawks dealt with the officer in his own way, but I never forgot the impact of his words, and the promise I made and kept.
But that was then, this is now and I know you will all join me in hoping that Chief Hawks gets completely well.
And from me to Ray, maybe it's finally time to retire.
Posted by Jim of L-Town at 6:21 AM 3 comments: I was watching television news from Detroit tonight and the cliches were flying on a story about a man who apparently set himself on fire in an Ann Arbor park.
The quotes aren't exact but basically here's what had me shaking my head.
"People were concerned when they came across a burning naked body," the reporter said in all seriousness.
Really, who gets concerned about a "burning, naked body."
Next was a statement that this was not the normal activity at this Ann Arbor park. Oh, really, they don't have naked burning bodies in this park everyday. Doesn't every park have a naked burning body every day.
The police chief offered the opinion that this was not foul play. The reporter then asked if it was a possible suicide.
I so badly wanted the chief to say it was a case of spontaneous combustion, but alas, she was much more polite than me.
Then the chief told the reporter that the "naked burning body" expired at the hospital.
Gosh, if only someone had paid to update his license, he wouldn't have expired.
At least the guy wasn't "fleeing on foot."
Posted by Jim of L-Town at 5:42 PM No comments: