Thanks to an alert Freefromeditors reader we have this sad tale:


http://orlandomagazine.com/Editor?view=article&id=61%3Afrom-the-editor
Posted by Jim of L-Town at 10:19 PM 1 comment:

Another one biting the dust

From a regular Freefromeditors reader this note about the Cleveland Plain Dealer:

Blogging from Buffalo, today. Home tomorrow.
Posted by Jim of L-Town at 10:19 AM No comments:

Buyouts at my new favorite daily 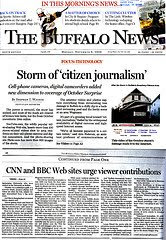 The Buffalo News, which I have touted in previous posts is a great daily newspaper, in my humble opinion. It knows its audience, it knows what news is and it delivers hometown crime and local news better than most.

As soon as we arrived here (in Buffalo), we heard about some looming buyouts at the paper.

In a lot of ways, it reminds me of the Flint Journal I came to in 1989. Good beat reporting, hard hitting editorials and decent daily feature stories. Despite falling victim to what everyone else in the business has, they have kept the main thing, the main thing.

They are offering buyouts, but are specifically exempting news room employees from them. I guess, just maybe, they realize that a newspaper product might be dependent on its main product – news.

We have a couple day's business with my in-laws in Buffalo, NY, so blogging could be a little slow the next day or two. I have not forgotten the salary story and hope to have it done over the weekend for posting early next week.

The sample was not as large as I would like, but hey, the Journal can make assumptions about an entire jail based on one week's bookings so I'll make a few of my own based on the sample of information I received on Journal salaries.

Anyway, check out the blogs I have linked to, many of them have new newspaper information that you might enjoy.

The following strange item appeared on the Flint Journal's website yesterday. Is this a new bill collection device for advertisers?

(This was in a box where an ad might have been)

Also what has happened to the comments counter on the Journal website? It is annoying not to have the counter because you have to click on every story to see if it is attracting attention. I have to believe that the lack of a counter is hurting, or at least slowing comments to the website.

The Flint Journal editor used his Sunday column to wring his hands about the anonymous posters on the newspaper's website. Much of what he wrote, I agree with.

Anonymous sources should be used carefully and rarely, but there is a place for them. While the editor was speaking more specifically about unnamed blog posters I would like to take a minute to talk about the occassional need for an anonymous source in a story.

Exhibit 1 will always be Watergate. Without "Deep Throat" the scandal surrounding Richard Nixon would never have happened. There are many other examples. Early in my career I was able to do investigative pieces on local judges only with the help of police officers and attorneys speaking on the condition of anonymity. (Which reminds me I'll have to tell the story of "Let 'em go Louie!")

Heck even the Journal's first lieutenant, who is now the enforcer of the no anonymous comments rule, used anonymous sources and "political insiders" during the time he covered politics many years ago.

In recent years, the Journal has turned down or stopped before completion a number of important stories simply because the folks who provided the information had too much to lose if their identity was known. A careful vetting of anonymous sources is crucial, but not impossible.

Reporters are often too quick to accept information based on the vow of anonymity, but there are times that it makes sense to use them. Police officers and nurses commenting about what is going on inside their own institutions face harrassment and discipline if their names were to come to light. It is true of many professions, including journalism.

About a dozen years ago at the Flint Journal we learned that there was no protection for us under the Whistle Blowers Act after a good reporter was fired and asserted protection under the WBA. The Journal's lawyers, who avoided arguing the merits of the case, asserted that Journal reporters were "at will" employees under State law.

A court ruled that reporters at the Journal were "at will" employees and could be fired for any, or no reason, without recourse. It was a chilling ruling that many of the veteran reporters took to heart.

People are free to post here with or without their name. I simply ask that people try to be civil and non-personal in their comments. As always, I reserve the right to edit the more pointedly personal comments. (I've only had to do that once).
Posted by Jim of L-Town at 6:46 AM 5 comments:

Here's the latest on Journal Register Co., owner of the Oakland Press and other area newspapers.

Not much good news here.
Posted by Jim of L-Town at 6:55 PM No comments:

Journal jail investigation nothing but a WAG

On Sunday, the Flint Journal ran a front page story "investigating" the now closed Flint Jail. The methodology of the investigation was to take a "typical" week, which they picked in May to look into whether the jail really was about arresting violent criminals.

First, there is no typical week for any jail, let alone a place as volatile as Flint. Let's pick one week at random of news coverage at the Flint Journal and use that to base an opinion of the overall competence and aggressiveness of the newspaper.

Pick the wrong week, one with say a bunch of corrections, maybe a down news period and you could come away with a completely wrong impression of the paper. So to start with, a week is not nearly enough time to make a judgement about any jail.

This was not an "investigation" it was a WAG - Wild Ass Guess.

Secondly, the Journal looked at about 250 arrests for that week. In the story they admit that 86 were for warrants that they could not determine whether they were for misdemeanors or felonies and whether for violent or non-violent offenses.

Heck, that's a third of the sample! With some records work, digging in court files, each and every one of those warrants could have been looked at and the status confirmed. Again, I'm sure there is little time for that kind of investigative work, even though it should be required for a story as potentially important as this one.

True, but totally incomplete. What the paper didn't go on to look at is that many violent offenders are often involved in petty crime, so arresting someone on a petty crime, could, and often does, take a violent offender off the street. Albeit not for a violent crime, but for something else. The effect is the same, the bad guy is off the street. Off the street, means that he/she is not committing a crime, at least for a time.

I have no way of knowing if this was the reporter's idea or an editor's idea, but any decent editor would have demanded a much larger sample of time than one week.

While I am no expert on crime, I worked for two California police departments for 7 years in the 1970s and covered police and crime for 25 years for a couple daily newspapers, I think I have a little credibility on the issue.

And as much as I hate to agree with Mayor Don Williamson, he and others who urge the reopening of the jail are simply, right on. When people can get away with not paying for even minor crimes, avoid being arrested on warrants and know with assurance they won't go to jail for most anything short of a major felony you have a recipe for escalating crime. It's undeniable.

Heck, New York Mayor Rudy Guiliani got it and cleaned up his city by concentrating on the minor crimes that for years were ignored. For those of us who visited New York City before and after the major crackdown ordered by Guiliani we could see, feel and appreciate the difference.
What the article concluded about the City jail, is true of any county jail as well. Most of the people inside are serving time for misdemeanors or felonies reduced to misdemeanors.

Why was there no comparable investigation of the same week for the Genesee County Jail? Why not advocate letting all non-violent prisoners be released from any state jail if there is no effect on violent crime.

The conclusions are absurd and the readership, especially those in Flint, are not well served by such a cursory look at such an important issue.

The one clear anecdotal fact, which was mentioned in passing in the Journal "investigation" was that there have been many shootings and ten homicides, nearly half of the city's annual total since the jail closed July 11. Now there's a statistic to build an investigation around.

A serious journalism investigative piece such as this should take in months of data, something I'm sure the strapped staff does not have time to do.

Thankfully, the Detroit Free Press did not pick a week out of thin air to investigate Kwame Kilpatrick's phone records, they looked at them all. Now there's an investigation.
Posted by Jim of L-Town at 5:30 PM 4 comments: