Someone sent me the following headline from the Flint Journal website today:

Team tries to beat the beetles off in Genesee County park

This needs no further comment, at least from me.
Posted by Jim of L-Town at 2:43 PM 2 comments:

For some reason the webmasters at the Flint Journal are no longer posting the weekly Sunday columns of the two main editors at the Journal. At least when you click on the link to their names the columns posted there are well more than a month old, in the case of one two months.

If you read through their columns online you will find almost no comments. The only column that the editor wrote that drew significant comments (about 21, which is pathetic by Detroit Free Press standards) was his defense of the new website against an onslaught of angry reader criticism.

There have been some recent significant errors on the website, some which were quietly fixed and others that are archived with the mistakes.

One recent one was in a cutline for a feature on an old homicide case. The story (accurately, by the way) indicated the woman was found dead in 2004 in her 2002 vehicle. The caption (or cutline in newspaper terms) indicated she died in 2002. Maybe a little dyslexia on the part of someone, but I checked two days later and the error remained even though a commenter pointed out the error.

The comments are not frequently moderated either.

All newspapers are facing the new challenge of letting readers take over control of websites. I'm not familiar with how all newspapers watch over comments, but it is clear that there is a severe need for pre-moderation of comments.

Newspapers that wouldn't think of putting a trained, professional journalist's copy in the newspaper before it was edited are quick to allow any anonymous poster to spew hate and venom without anyone looking it over.

This has to be a lawsuit waiting to happen. Maybe it already has somewhere. In Tuesday's Flint Journal website there was a story about political signs involving Flint Mayor Don Williamson. About 11:30 p.m., long after any editors are on duty at the Journal, a poster named "inyourbiznes" posted the following comment, which I have edited to remove a city employee's name:


Both have a sixth grade education and are like children. If (the employee) would stop stealing saws, mowers and wood from the Parks and Recreation Department that would be a news story. Drive by his home and you can see it all sitting in his yard with his god-awful recall sign. This guy is a hilljack!! He is trying to win a suit against the city just like his daddy did years ago. And with the Con involved he probably will win.Both of these men should be proud. Proud for the fine face they put on representing their city.

There's enough libel in there to make someone pretty wealthy. And who knows who "inyourbiznes" really is. Heck, it could be a friend of the city employee trying to drum up a libel suit. The point is the post was up for nearly ten hours before a Journal website monitor removed it with a short comment about it's inappropriateness.

I'm going to start making screen grabs of the offensive comments and saving them so they won't be lost to cyberspace. The point of saving them is to prove that just removing them does not mean they are not still out there.

So in the Flint Journal's case they are OK with letting anyone libel anyone else without having a gatekeeper to stop the offensive remark from being published online. And yet, and I only bring this up again because Channel 12 is continuing to kick the Journal's butt on the Great Lakes Mortgage Broker story with another update Thursday night, they were terrified of printing a story that would have exposed one of the largest mortgage scams in the State because the offender refused to offer a comment last August.

The paper should at least be consistent in its policies about publishing possible libel.
Posted by Jim of L-Town at 8:12 AM 1 comment: 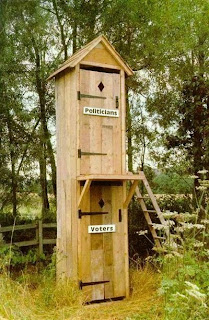 I've got a very busy day ahead and no time to blog, so I leave you with this picture, which was sent to me by my brother Mike, as the thought of the day.
Feel free to click on the picture to get an even larger look.

A former Journal editor chimed in after seeing the following errors and omissions in the paper on one day in April. I have omitted the names of the reporters involved as some of the information that was excluded should have been caught by copy editors, but most of the ones who would know the info are enjoying the sunshine somewhere warm after taking the buyout.

Here's the info sent to me in an e-mail. I know the editor who sent the info, but they have asked me not to print their name:
Page 1 - Feature on remains (including wedding ring) found of airman killed in WW II. And nowhere in the feature is there any mention of the widow. Dead? MIA? Who knows? Strike one.
Page 3 - Feature on Charlie Bell visiting Flint Central to be tested for high blood pressure. (Reporter) writes he was a member of the Flintstones who got to the Final Four in 1999. And no mention that he was on the NCAA championship team in 2000 and also the Final Four team in 2001. Strike two.
Sports front - game story on Tigers. sentence ends, then it's a jump. And when you get to the jump, the story picks up in mid-sentence and Leyland is talking about Guillen and Cabrera. And unless you already were aware of it from someplace else, there's no way you'd know he was talking about them switching positions in the field from now on. Strike three.
Another great day at the new FJ.
This from another former editor (not same as above):
There was a story in Saturday's Journal about our church's 50th choir festival coming up. I see that (former freelance reporter) has been brought back to help fill the post-buyout talent abyss. (Editor's note: I removed the story link because the Journal links are only good for two weeks and its maddening to click on them only to find nothing at the other end)
So why am I complaining? Our choir director's name is Mark Riddles, not Mark Reynolds. Sigh ...
Eds. Note: Maybe they are missing a few of the "characters" who left. Naaah, everything is wonderful.
Posted by Jim of L-Town at 7:08 PM 2 comments:

Fasteddie chimes in on JRC meanness

Fasteddie is a frequent visitor to this blog. He sent me by e-mail a reflection on the owners of JRC, the string of newspapers that includes the Oakland Press. Recently I posted an item (http://freefromeditors.blogspot.com/2008/04/more-bad-news-for-oakland-press-journal.html) about the pending financial failure of that newspaper ownership.

Fasteddie chimed in with a reflection that brings the failure and meanness down to a human level. Sometimes I think we forget that many of the people being hurt by the decisions of media tycoons are human beings.

As told to me by Dick Hunt deceased former Chief Photographer at The Royal Oak Tribune.

Dick Hunt was one of the hardest working photojournalist I have ever known He did the work of two for all of the nearly fifty years he was at the Tribune.

Reaching his goal of fifty years at the Trib was to be his greatest achievements. Dick had won numerous awards and was at one time president of The Michigan News Photographers Association.

The Tribune became another of JRC's victims when it was bought as part of the once proud 21 Century chain that included The Oakland Press.

It was just a matter of weeks before Dick would make his Fifty year goal and a couple of big parties were planned by employees and friends. But the heartless managers at the Trib called Dick into the dirty little office and told Dick to turn-in his keys and camera and leave the building. You are being let-go.

Dick was stunned and pleaded to be able to finish the few weeks left and achieve his goal also, he had already planned to retire at the same time. "No" was the reply. He even offered to work free for the remaining time. "No".

It broke his heart and spirit. I had a long lunch with him shortly after that day. He was a broken and in the over fifty years I had known him he was a changed man.

Dick dropped dead a couple of days after our last of many times together. But JRC did save that few extra days of pay and perhaps more importantly having to buy a gallon of ice cream and a small cake for the dozen remaining employees sill huddled in one corner of the once nice building the Trib build about fifty years ago.

Editor's note: If that doesn't turn your stomach, not much will.