For my Dad: Low fly bys

A friend sent me a link to a You Tube video of low airplance fly bys. It opens with a great scene from Top Gun, but then transitions into great real life fly bys. I'm posting this mostly for my Dad who loves airplanes. (Note, and thanks to Mark, there is some salty language in the opening "Top Gun" segment). I didn't review the video with sound when I first put it up. My apologies.

In any language, I'm fascinated by magicians

This came to me through e-mail and while it is in a foreign language it won't matter. Watch for a minute or so and maybe you'll be as amazed as me. I'm a sucker for this stuff.

Today is the day the new Tuesday Flint Journal his the news stands. I hope this is the beginning of a return to 7-day a week home delivery because that's what people need. If you need to know where to find one MLive.com has a locater.
Posted by Jim of L-Town at 7:04 AM 2 comments:

No one can deny that Sidney Crosby (I usually call him Cindy) is a great hockey player with excellent skills. But as a player he is a punk. Last year, he missed the tradional post-game handshake with the Detroit Red Wings after they won the Stanley Cup.

He is a notorious whiner. But last night he earned his punk label by going after Henrik Zetterberg when the game was over for the Penguins. That's when rookie goalie Jimmy Howard stepped in and backed up his teammate. Here's the video: 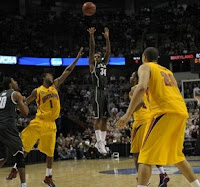 This shot sent the Michigan State Spartans to the Sweet Sixteen at the buzzer. Sweeeeeet!
Found the photo on Facebook without attribution, so if there is a credit to go with it, let me know.
Posted by Jim of L-Town at 11:55 AM 4 comments: