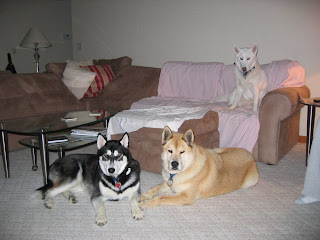 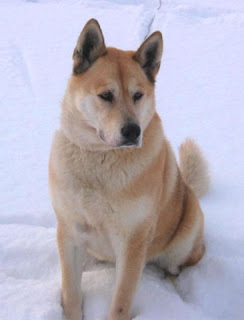 In the current economy many folks are just leaving behind or turning loose animals they can no longer afford or care for. That is pretty sad, but to prove how ecletic this blog is I am posting this short article and picture to hopefully help a friend and a dog who showed up on her property the Saturday after Christmas.
Initially my friend turned the dog into the Animal Shelter, but no one came to claim him, so she reclaimed him before it was time for the evil deed to be done.
Here, in my friend Tracie's own words, is the information on the dog:

"He’s a husky/chow mix. He’s got a husky coat, with the chow coloring and black tongue. He’s good with kids and normal dogs (he’s not wild about my spastic young male husky, and I can’t blame him). My Kodi is constantly in his face being a pain in the butt. I’ve been calling him Teddy Bear because of his beautiful reddish coat. He gets along well with my female husky who is calmer. He is neutered and well mannered. He knows sit, stay, shake, lay down. He is housetrained and likes to have a crate to lay in. He’s very comfortable laying on the floor at your feet. He’s obviously a wanderer, so he would need some sort of containment. Either in the house, cable system or fenced yard (I use a wireless fence for my huskies). I had my vet check him out and he is heartworm and parasite negative. She feels he is around 5-6 years old. I also took him to the doggie spa and got him all shined up.

You can put my email: huskywalkr@gmail.com and my phone 810-441-5819."
If we weren't tied up with family and traveling issues, I would think about it, but it simply is not in the cards for now or in the forseeable future, but maybe one of the readers of this blog is looking for a decent dog with all the hard training work already done.
Posted by Jim of L-Town at 12:37 PM 3 comments:

While I was away, a loyal FFE reader sent me a note that the Flint Journal published the exact same story and exact same photo of Jimmy Buffet in separate sections of the Journal on the same day over the past weekend.

By the time I arrived home the dead tree versions of the FJ had been recycled so I did not personally see this. But I know of at least one Parrot Head at the Journal so, who knows?

And just to show I'm not anti-Jimmy Buffet (I went to his show back in the old Pine Knob Days with the resident Flint Journal Parrot Head) here is the Buffet performance on "The Today Show" a couple years ago.

Word is that the owners of Booth are not yet sold on the idea of a central copy desk for all the State's newspapers located out of Grand Rapids.

The cost saving measure to reduce and consolidate copy desk functions was perhaps the most confusing part of the Booth rescue plan.

Now word is that the Flint Journal (and presumably the other Booth properties) are being asked to craft proposals on how they would continue local copy editing functions with the personnel that remains after the buyouts.

Of course, a number of local copy desk folks have already accepted the buyouts after this word came down so one has to wonder if that was intentional or simply coincidental. This has all the appearance of a beached whale trying to find its way back to the ocean.

It is simply hard to imagine the lack of foresight and leadership in a business that so sorely needs it now. And yet, those in charge find a home for those most incompetent folks in the future leadership.
Posted by Jim of L-Town at 7:09 AM 5 comments:

Too true, so sad

Then there's this decision by the Atlanta Journal and Constitution.

From a reliable Oakland Press source.

Want to get your story or better yet a free advertisement in the Oakland Press?

Here's how; You don't need to be a good writer or photographer.

There are two ways to get free "ink." First, and the easiest, is to just send a fax or email to the editor or city editor. Outline what you want covered. ie; say you have a new business,? it need not be new, just say so.

A used dress shop, a hamburger joint that is cerebrating its first year in business, or say a barber that is retiring after a decade in the same location. All of that is ok, just outline it and almost without a problem a reporter ( or one of the new unpaid "citizen reporters") will take a picture and give a non-factual, one-sided glowing coverage of a story that only you care about.

If you're able this works even better: Supply a decent photograph and a story telling how great your business is. Look! It's done every day in the Oakland Press. If you are in public relations and need to give your client a boost just e-mail your story, all packaged-up to the Oakland Press and, Bingo! there it is on the front page. News content is not a requirement.

Just fill space. Good luck, but you will not need much to be a hero to your company. 'Almost forgot, if your retiring from any job for any amount of years it almost a given you will get a story published. Just ask.

Don't blame the lower editors for this one either. They are very short staffed and the leadership basically believes that it doesn't matter what you put in the blank space around the ads.

I once worked as an editor for the Ingham County News and a business owner called me to say if we would do an article, he would buy an ad. "Now," I told him, "would you want to read a newspaper filled with gratuitous articles like that?" He admitted he would not. I convinced him that a good readable newspaper, filled with articles people actually wanted to read would be the best way to make his ad work. Don't remember if he bought an ad, but we did not do the story.
Posted by Jim of L-Town at 5:16 PM 1 comment:

Thanks to an anonymous, but impeccable source, I have a copy of the e-mail sent from editor Glenn Gilbert of the Oakland Press. Here is the memo, I will comment after:

Our first citizens journalism class was a stunning success. We had 45 people in news and seven in sports. Jeff will handle sports, but in news, 29 of the individuals filled out forms desiring to continue in the process.

There is no way to make this work without staff commitment. I would never ask you to believe something that you don't believe in, but I do need your help. Names will be divided up among newsroom personnel. You will be responsible for working with the individual and accountable for their progress and your contacts with them.

Be generous with your time, but time-efficient. You can learn valuable teaching, coaching and management techniques in the process. Some of you who are teaching oriented will enjoy the process. Just remember, those who teach learn. Let me know if you think you can handle more than one or two individuals, or your interest in the process (or even lack of interest if you feel strongly).

Ain't this grand, the editor is strong arming his staff to help those who are in line to replace them. And I love his little aside at the end "or even lack of interest if you feel strongly." If you feel strongly about that you may be replaced sooner than you might anticipate.

And don't think of this as extra work, think of this as a chance to learn more. Where did this guy come from? He had to have been a press secretary for some politician to put out doo-doo like this.

If this is journalism, then Mr. Toad's Wild Ride is the Indianapolis 500. I don't even know what more to say about an idea this stupid.
Posted by Jim of L-Town at 4:52 PM 7 comments:

Back home, blogging to resume

Arrived home late Tuesday and made my way home in a two and one half hour (usually one hour and fifteen minute trip) from Detroit Metro. Freezing rain turned all the freeways into ice rinks. There were accidents everywhere and I-94 eastbound was completely shut down at M-39 for a half hour.

I appreciate all the kind sentiments here and on Facebook about the loss of my brother. The world seems oddly out of place with the loss of my younger brother, but life does go on and my brother, a frequent commenter here under the name "jim's brother", would not want it any other way.

So after I go to work today I will return to blogging. I received a copy of a memo from the editor of the Oakland Press who was literally giddy over the turnout at his first citizen journalist seminar and is now asking all reporters and editors to take on one of two of the reporters to help them learn the ropes.

It would be funny if it wasn't so sad. I'll put the memo up later today. There is also some additional Booth news and that will go up as well. I just don't have time this morning to put it in some readable form.

If you come back this time tomorrow (Thursday) it should be up.
Posted by Jim of L-Town at 7:18 AM No comments: