A lean Thanksgiving FJ, and news of ad sales plummeting

My Thursday Flint Journal arrived with three sections, two were extremely thin. Many of the stories in the front section appeared "borrowed" from the weekly papers (although they were good stories).

The Friday paper arrived and was pretty full of inserts (many advertising 4 a.m. Friday events that were long over by the time I got my paper) but again light on space. It appears the weekend reporters have been swamped with fatal accidents and other breaking news.

Ron Fonger did a good story on the local effects of the GM down turn earlier this week and since I complained about a lack of such coverage, just wanted to acknowledge that it had finally happened. But the business section is still largely wire and borrowed Booth features as I believe there is only one reporter assigned to business news now at the Journal (down from 4 and 5 in former years).

There has been other news on the newspaper front and I have teased with the story's lead and linked to the story here:

"Newspaper advertising sales dived by a record 18.1% in the third quarter in a historic, across-the-board rout paced by a nearly 31% plunge in classified revenues." 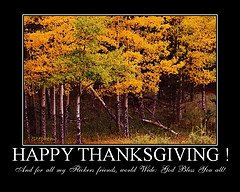 I have family from out of town arriving this morning. My sister and brother-in-law from Chicago and my father and stepmother from Virginia.

We will be busy eating, laughing and watching football so I won't be here blogging and my hope and prayer is that you won't be here either. This is a time for family and thanksgiving, not for the surface frustrations of life.
Followers of Jesus know the words of the Bible: "In everything give thanks." It's a concept that is difficult for everyone, believers and non-believers, because everything includes those things that are not so nice.
Doors open, doors close, but behind each new door is a great adventure. Enjoy the holiday, I'll check in once in a while to see what has been left, but there will be no new posts from now until Saturday, at the earliest.
I give thanks for you, my friends. And if you can help someone, by all means, do.
Posted by Jim of L-Town at 7:39 AM No comments:

Attrition is not just buyouts anymore

Word out of the Flint Journal is a veteran advertising representative was fired and not offered a buyout or severance in the past week.

The employee, who was encouraged NOT to take last year's buyout and stay, has reportedly a better sales record than those who were spared. The employee was transferred out of the display advertising section and moved into the classified arena, which is not particularly lucrative at this time in newspaper history.

There is also word of a similar firing out of Saginaw. So it appears the attrition needed by the company will not all come with a parting buyout or severance check.

The source who provided this information said it may be the company is seeking any excuse to lighten its load without paying the price. That's two Flint Journal employees fired in a month, which is almost unheard of in its history.

As I receive more information on this and other employment actions, I'll post it.
Posted by Jim of L-Town at 4:59 PM 15 comments:

Another interesting read on advertising trends

A loyal FFE reader has sent along another interesting read about high end advertisers and their cutbacks. 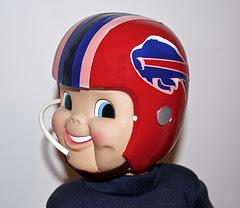 As I've mentioned before (endlessly) I love Buffalo, NY. But there is nothing like Buffalo, NY on a Bills Sunday.

Yesterday, to give my mother-in-law a little break from caring for my father-in-law I took her to a local gin mill to play a little Quik Pick (a NY lottery game not unlike Keno).
We both forgot the Bills were playing the early game and the bar was packed. The Bills were scoring like every 30 seconds so the bar was very loud and riotous. But the loyalty these fans have to their football team is infectious and you can't help but root for them.
Someone at the bar made a snide comment about the Lions, but then I make snide comments about the Lions all the time and no one at the bar knew I was from Michigan, so there was no offense intended.
But the happiness the fans felt, just for three hours was kind of cool to watch. Buffalo, which is pretty much like Flint planted next to Niagara Falls, needs a break from its woes and the Bills certainly provide that. Of course Flint and Michigan needs a break from its woes and we're stuck with the Lions.
No one could believe it when we packed up mid way into the third quarter to leave the bar (they couldn't believe it earlier when I ordered a non-alcoholic drink either), but my wife had been back at the house preparing a full course Thanksgiving Dinner and who wants to miss that. Besides when we arrived home a few minutes later, my wife and her Dad, who has plenty of woes of his own, were happily enjoying the Bills rout over Kansas City on two televisions, one in the living room and one in the kitchen.
Dinner was a little late, thanks to the Bills, but no one cared.
We'll be home later today and I'll be back to serious blogging on Tuesday.
Posted by Jim of L-Town at 8:02 AM No comments:

An MSU journalism professor is seeking information from the various Booth papers on what the individual and overall losses will be from this wave of buyouts.

David Poulson has given me two addresses to reach him:

He also has a great deal of info over at:

So Blue! MSU and U-M fall and fall badly

Not a good day yesterday for either of the home teams. But MSU still had a good season, 9-3, and will be going to a decent bowl game so we still have that to look forward to.

Still in Buffalo doing chores, but will return to the financial ruin that is Michigan tomorrow and will catch up on all things Booth and report back on Tuesday. As I blogged previously, at least our gas prices are better than most anywhere else.

Big story here in Buffalo is why the gas here remains in the $2.45 a gallon range. Something about only one pipeline, yada, yada, yada.

Hope everyone has had a peaceful weekend.
Posted by Jim of L-Town at 12:25 PM No comments: