The "Green" thing, then and now

I really loved this.

In the line at the store, the cashier told the elderly woman that she should bring her own grocery bag because plastic bags weren't good for the environment. The woman apologized to him and explained, "We didn't have the green thing back in my day."

The clerk responded, "That's our problem today. The former generation did not care enough to save our environment."

Her response: "Do you think you are right because our generation didn't have the green thing in its day? Back then, they returned their milk bottles, soda bottles and beer bottles to the store. The store sent them back to the plant to be washed and sterilized and refilled, so it could use the same bottles over and over. So they really were recycled. But we didn't have the green thing back then.

"In my day, they walked up stairs, because they didn't have an escalator in every store and office building. They walked to the grocery store and didn't climb into a 300-horsepower machine every time they had to go two blocks. You are right - we didn't have the green thing in my day.

"Back then, they washed and dried all the baby's diapers because they didn't have the throw-away kind. They dried clothes on a line, not in an energy gobbling machine burning up 220 volts - wind and solar power really did dry the clothes. Kids got hand-me-down clothes from their brothers or sisters, not always brand-new clothing. Maybe that's why we didn't have the green thing back then.

"Back then, they had one TV, or radio, in the house - not a TV in every room. And the TV had a small screen the size of a handkerchief, not a screen the size of the state of Montana. In the kitchen, they blended and stirred by hand because they didn't have electric machines to do everything for you. When they packaged a fragile item to send in the mail, they used a wadded up old newspaper to cushion it, not Styrofoam or plastic bubble wrap.

"Back then, they didn't fire up an engine and burn gasoline just to cut the lawn. They used a push mower that ran on human power. They
exercised by working so they didn't need to go to a health club to run on treadmills that operate on electricity. You see, they didn't need the green thing back then.

"They drank from a fountain when they were thirsty instead of using a throw-away cup or a plastic bottle every time they had a drink of water.
They refilled their writing pens with ink instead of buying a new pen, and they replaced the razor blades in a razor instead of throwing away the whole razor just because the blade got dull. But they didn't have the green thing back then."

"Back then, people took the streetcar or a bus and kids rode their bikes to school or rode the school bus instead of turning their moms into a 24-hour taxi service. They had one electrical outlet in a room, not an entire bank of sockets to power a dozen appliances. And they didn't need a computerized gadget to receive a signal beamed from satellites 2,000 miles out in space in order to find the nearest pizza joint.

"Isn't it sad… the current generation laments how wasteful the old folks were just because they didn't have the green thing back then?"
Posted by Jim of L-Town at 8:01 PM No comments:

Former Ann Arbor News reporter Tom Gantert re-visits the success, or lack thereof, at AnnArbor.com some 22 months into the experiment on A2Politico.
Posted by Jim of L-Town at 10:59 PM 1 comment:

One example of what I was talking about

One of the key newspaper delivery folks for the Journal gave his two week notice (found this on Facebook) with the new policies at the Journal.

In his Facebook posting the driver noted that when the three-day-a-week Journal started back in June of 2009 he had 859 customers. A year later that number had fallen 154 customers to 705 and as of last Sunday was down 230 customers to 629.

I don't think newspaper management can blame the folks who deliver the newspaper for the decline, but they are paying the penalty for yet more poor business decisions from the folks who yet survive.

This is just my guess, but a lot of those drivers hustle and work hard and over the years have done pretty well financially, many of them have incomes - due to their own efforts - higher than the bosses in the office. There may just be a tad bit of jealousy going on there as well.

In any event, they all deserved better.
Posted by Jim of L-Town at 7:52 AM 18 comments:

On June 14th the Journal will begin home delivery of the Tuesday newspaper (currently available only at stores). But the change also brings some really bad news for some veteran single copy drivers, some who have been with the paper for more than four decades.

The change will see the end of the careers of many really wonderful people who have loyally delivered the paper. These delivery drivers are the unsung warriors of the newspaper business and they work long and awful hours and back in the day sometimes worked seven days a week.

Termination letters have gone out to about 18 of the single copy drivers and when the Tuesday change occurs the home delivery drivers will also be responsible for bringing the single copy issues to the stores.

You probably will hear a lot about the Tuesday delivery, but you will likely not read much in the paper about the effect it will have on this unique group of workers.

From the best information I have the current situation is that the single copy drivers make 17 cents profit for a daily paper and 49 cents for a Sunday paper. Now the home delivery drivers will get 8 cents a copy for every paper they deliver, even if not sold.

So here's what will happen:

Say a driver gets enough stores to deliver 120 Sundays and the stores sell 100 of them.

Driver gets paid $9.60 to deliver and may have to pick up any unsold and take them back to the FJ.

In the past the same situation the driver would have paid the store its cut, paid the FJ $133, and then made $49 profit for all the work.

Hardly worth the gas at current rates. And there are no buyouts for these long time newspaper delivery folks.

Some of the home delivery folks have already seen drops of up to 1/3 of the subscribers they had when the Journal ended daily publication. 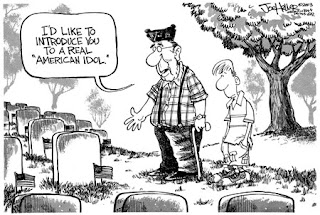