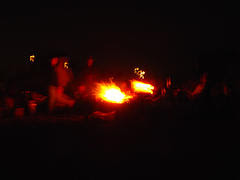 Tonight is our annual fall party. We invite all our church members, neighbors, friends and family to come join us for dinner and then for the most hardy, outside for a bon fire. It's going to be clear (as it always has been), not too crisp (about 59 at bon fire time) and wonderful.
We sing, we talk, we laugh and mostly just enjoy the various connections we have. We pray for new people to come and join us (everyone is invited to bring a friend) and we hope with anticipation to meet new folks.
I know my friends in California won't quite get the bon fire (they are pretty much banned in California for obvious fire concerns), but sitting around a nice warm fire, roasting marshmallows and making smores is something that takes us all back a few years.
Colors are not quite in full spew, but they are pretty stunning nonetheless. There's also a wonderful rumor that our little granddaughter, Miss Addisen, may be making an appearance. That is always reason for celebration.
It's a time to forget about Presidential campaigns, conflict, stock markets, housing prices and all the other useless distractions of life.
So if you are a friend, know our address, please feel free to stop by and join us tonight, starting at 6 p.m.
Tomorrow, I will post some photos for all to enjoy.
Posted by Jim of L-Town at 7:55 AM 4 comments:

The only thing better would have been clogging goats 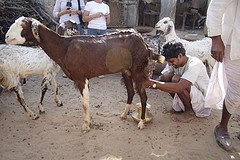 As promised, I want to write a little about the cursed Saturday assignments at the Flint Journal.

Some of the most favored editors at the Journal simply had a problem with allowing weekend reporters the latitude to look for and find news on their own. Many of my colleagues were effective reporters who enjoyed the challenge of finding a good news story.
But as I've talked about before, certain editors at the paper always thought they knew best, even though they had little breaking news reporting experience of their own.
Before the current crop of top editors took over, there was a management strategy that simply turned reporters loose to find news on a beat. Sometime in the late 1990s that began to erode and assignments, some so ridiculous as to defy description.
Left to my own devices, I could often come up with three or four good news stories on my own. I had several Christmas days where I worked and rustled up a murder or two, a touching feature just in time for the holiday and maybe a fire or three. Many reporters at the paper were equally able to do that.
But then came the geniuses. Saturday shifts became a dreaded chore, filled with some of the dumbest story ideas ever conjured up by an editor.
None were dumber than the Saturday shift that was drawn by Ken Palmer about nine years ago. Now Ken, who had great cops and court contacts, could have easily found a story or two on his own on a Saturday, but that didn't work for the new bosses.
So on this particular Saturday, Ken was sent first thing in the morning to cover a "goat milking exhibition" somewhere in rural Genesee County. This also became known as the "goats are people too" story. Unfortunately, you will not be able to hear for yourself, Ken's hilarious description of this assignment, but I'll try.
Being a good soldier, Ken grabbed his notebook and pen and headed to the farm where the "goat milking exhibition" was to take place. When he arrived he found himself alone with a woman, who was not milking a goat.
When Ken showed up and told the woman he was there to cover the exhibition her reply was an incredulous: "You are?" Followed quickly by, "the goat is not giving any milk today." But a photographer already had a picture of a goat, and an assignment is an assignment. So thinking quickly, Ken told the woman to simply start talking about goats and when he had heard enough to make up a story he would stop her and leave.
Somewhere along the line, the woman opined that "goats are like people," which the alert Ken knew would become his lead. And so with a notebook filled with goat facts and a woman's startling impression that goats are like people, Ken closed his notebook and wrote his story. The lead of the story: Goats are people too.
Now that one assignment would have been bad enough, but the Saturday editor had also spied a calendar item about a clogging exhibition (yes, people dancing in wooden shoes) in Shiawassee County and assigned Ken to spend his afternoon covering that.
Again, listening to Ken tell this story usually brings tears to my eyes with laughter as he describes the young dancers "klippity-klopping" back and forth across the dance floor for a endless hour. But, again, an assignment is an assignment and once an editor has slotted a page for a picture and a wooden shoe, well you better come up with some hefty prose on klippity klopping, or else.
So that is the Saturday stupidity by which all Saturdays are gauged. Many of us can recount many examples of stupid Saturday assignments. One of mine involved hiking ten miles in two-feet of freshly fallen snow with the Sierra Club hikers in January, even though I was neither in shape to do it, didn't have the proper equipment to do it and the fact it took me nearly two hours into the woods where I couldn't have responded to a real news event if I wanted to, which I did. The Sierra Club hikers had snow shoes, I had moon boots.
It would have served the Journal right if I'd had a heart attack, but then who would have covered it. I did end up with ankles worn raw from the boots.
Another Saturday, I was sent to the south side of Fenton to cover the Pinewood Derby even though there had been a double homicide the night before. (Actually, I ended up covering both the Pinewood Derby and the homicides, but not nearly with the concentration I should have.)
Another time I was sent to cover a Daddy daughter hike (do you see a trend here?) on a trail in Elba Township in Lapeer County. Only one Dad and daughter showed up, which was two more people that ended up coming from the photo department, but I still had to do a story based on one pair of hikers.
I'm going to entertain more Saturday story travesties as they come in.
Posted by Jim of L-Town at 9:36 PM 1 comment:

Back, blogging to resume

Well, I just returned from Traverse City (wow, were the colors even more stunning than usual) and so blogging will resume - tomorrow.

In the waiting mode

Blogging will be a little erratic in the next few days as I am traveling. Whether I get on here or not depends on whether I find a wireless signal, or not.

In the meantime, I'm still waiting, along with folks at the Journal, as to whether the editor's prediction of a buyout becomes reality this month, or whether it's just more wait and see.

One of my next blog projects is a rather extensive look at one of the "favorite" things to Journal reporters: Saturday assignments. I have compiled a list of some of the more memorable Saturday assignments, stories that the managing editor believed were so compelling that they came before actually finding real news, and will publish them soon.

Here's a tease: One reporter had two memorable assignments on the same Saturday. The first assignment was to cover a goat milking exhibition and the second, his afternoon job, was to report on a klogging (yes, wooden shoes) exhibition in the afternoon.

That Saturday is the story stupidity Saturday by which all Saturday story ideas are measured. I had my share, heck, we all had our share and I'll share some of those with you this week. So keep checking back.
Posted by Jim of L-Town at 6:21 AM 1 comment: