Flint Journal editorial hypocrisy has been discussed here before (http://freefromeditors.blogspot.com/2007/12/sometimes-no-news-is-hypocrisy.html), but an editorial posted on Sept. 12, 2008 really takes the cake.

The Journal says a school district should not use advertising on buses for the sake of the children. Good enough. Makes sense. However, the Journal delivers its product to schools every week under the Newspaper In Education program.

Guess what, those newspapers are full of advertisements, many directed at young people, and they didn't bother to say that's a bad thing.

Might have something to do with the NIE program and its importance to the overall circulation numbers of the newspaper. The newspaper loves sending those papers to schools because it inflates its circulation numbers, which in turn allow them to charge advertisers more money. Or maybe they are just concerned about another competitor for ad dollars.

So my beef isn't with the content of the editorial, but in the fact that I doubt the newspaper will follow its own advice and decline to send the newspapers to the schools out of concern for hurting the children.
Posted by Jim of L-Town at 12:51 PM No comments:

For my friends at the Journal, if you've had enough bad news for awhile, forget going to this post because it will seem all too familiar.

But if you are into newspaper masochism there are a number of equally depressing items at the "Fading to Black" link in the right hand column.
Posted by Jim of L-Town at 4:53 PM No comments:

OK, first I have to correct my first report on the new round of buyouts. The information came not from Publisher Dave Sharp, but was given to staff members by Editor Tony Dearing following the weekly recognition meetings. (Gosh, I hated those).

After gushing over this week's stories (one of the editor's favorite, if incomprehensible sayings, was that this or that writer "had written with authority." Never knew what that meant, because the examples he gave were simply just good writing that any competent reporter could or should do. Or how about the other time he lavished praise on a reporter for using a reverse directory to find a witness for a story by, stop the presses, looking in a reverse directory. Any first year cub reporter would know how to do that, but to the editor this was a major accomplishment). Sorry for the aside, but I quit going to those meetings after he gushed over the work of an editor over the coverage of a tornado. What the editor apparently didn't know was the weekend coverage of the tornado was almost completely reporter driven. The best thing the editor did that particular weekend was that he got out of the way and let us do our job, which come to think of it probably deserved some praise because it so rarely happened.

Anyway, back to the buyouts. It sounds like after a little prodding, the editor acknowledged that the revenue stream had turned to a trickle and that some serious additional cutting had to be done. Sounds like editors may be on the block this time as the Booth company is now looking at consolidating all the properties into one massive budget.

Because I wasn't at the meeting I'm piecing together information that tells me that people and resources could be moved around to maximize profits instead of each paper serving on its own.
The inference was that what had been seen as a potential profit turnaround by 2010 is not happening and may in fact be deteriorating.

No specifics were announced on the next round of buyouts, but there was some statement that they won't be as lucrative as they were last year. Believe me, those of us who took the buyouts are very thankful (and grateful) for the extent of them.

We are sad that our colleagues continue to face the uncertainty of the newspaper's survival. It is hard to imagine the company selling the Journal or even closing up shop, but it sounds like those options are on the table, at least a year from now.

Publisher Dave Sharp has told the staff that the hoped for turnaround at the newspaper simply has not happened. It was one year ago this week that the second round of buyouts were announced at the paper.

As you will recall, the deal at that time was four weeks pay for every year worked if you were a full-time employee. The publisher also said that there would be no further buyouts and that this (last year's buyout) was the best opportunity to get out with a little cash and dignity. 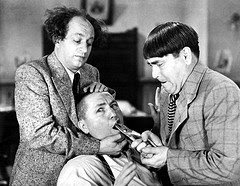 Flint (Michigan) Mayor Don Williamson has launched a website to root out political corruption in Genesee County, Michigan.
That's a little like Charlie Manson launching a website to identify crazy, lunatic, homicidal maniacs in California prisons.
Mayor Williamson has a thick brain and thin skin, a dangerous combination.
So "The Don" as he is known in these parts (you know the angry part of the country where we cling to our religion and our guns) has identified his first five targets:
The first two targets, Alex Harris and Raymond Bridges, just happen to be the key movers in an attempt to recall the mayor. Two others are executives at the Flint Journal and the third is a Flint Journal columnist who has been ruthless (in a ruthlessly good way) towards the Mayor.
So the first five corruption targets are simply opponents of the Mayor. No secret there and here is the exact text on the website, which is "thecorruptionmustend.com."
"We look forward to meeting you and working with you to put a stop to the corrupt politics in Flint and Genesee County! The corrupt politicians and the agenda driven media need to be exposed, but we need your help, please make a donation today!
COMING SOON!!! "My life as a Prison Guard."
Alex Harris abuse of power...
COMING SOON!!! "My ties to Drug Dealers."
Raymond Bridges is comfortable on the corner...
COMING SOON!!! "The Three Stooges Exposed:"
David "LARRY" Sharp (FJ publisher, my note)
Andy "CURLY" Heller (FJ columnist, my note)
Tony "MOE" Dearing (FJ columnist, my note)"
I think the Mayor has it all wrong here, Andy Heller is clearly "Moe."
The website is a joke. You can leave a comment, but not without enough information for someone to start an FBI probe on you and then only comments approved (read only positive comments) will be used. Guess what, all the comments are positive so far.
This is a Mayor who has a police chief who will fire you if you talk to a newspaper (then they hire you back after a city lawyer explains that the chief and city are walking on legal quicksand).
Frankly, the newspaper has been too easy on the Mayor. Some suspect that the large advertising contract of the Mayor's Flint Township car dealership (OK, it's technically the Patsy Lou Williamson dealership, but everyone knows who really runs it) has influenced some of the paper's coverage of the Mayor. I simply don't know.
Brief aside: Before he was Mayor, Don Williamson, did land me an interview with his good buddy, Burt Reynolds, who was the namesake of a Dodge truck tricked out as "The Bandit." As I recall the truck also had Burt's signature on it.
Burt was in town to promote the truck and I was able to interview him for nearly 45 minutes at the dealership. It was a fun interview that actually broke a little news as Burt had just completed the movie "Boogie Nights." Reynolds did not want to talk much about the movie even offering that it might have been a mistake. He changed his tune a few months later when he was nominated for an Academy Award.
Aside over.
If the Flint Journal wanted to it could go back a few years and look up another highly touted website that hizzoner started after he was first in office. That one had to do with slumlords. He set up that website to track down the worst blight offenders in the city and again to attack the media.
After a few weeks flurry of stories and comments, it fizzled like a wet firecracker. The mayor is all flash and dash, but no substance. So if you're interested in seeing the website, better check in quick, it is likely to fade into history in short order.
And for those of you checking in from Estonia, Morocco, France or even California, just thank your lucky stars you don't live in Flint. 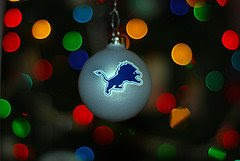 All the optimism of a 4-0 preseason just evaporated with the reality of a 34-21 loss (and it wasn't really that close) to the young Atlanta Falcons team (rookie quarterback Matt Ryan shredded the Lions) may be a preview of what is to come.
As always, my expectations for the Lions (last championship came when Eisenhower was President) were very low and not unrewarded. My plans were not to watch the game, but my wife talked me into it saying that I needed to relax after a busy week and a busy Saturday cleaning our yard.
Now I wish I had worked outside. What a wasted afternoon watching a wasted effort by a wasted team.
If any city or region needed a lift right now it's Detroit (depression, disgraced Mayor, slumping Detroit Tigers baseball team - and if you need more I can send them to you) but unlike the inspirational New Orleans Saints, we have, to be charitable, an unusually bad football team here in Detroit.
So I hate to give up on them this early, but for the sake of my attitude and to return productiveness to my afternoons, I must. Someone let me know if they turn the corner on this miserable performance, but not until they have tallied eight wins, anything less is just another wasted season.
And just in case you are an Atlanta Falcons fan, don't get too excited about your team, either. The Lions have made a lot of poor teams look better than they really are in recent years. So I wish you well, but you'll need to face a real team before you know how good your team is.
The Ford family might have had the formula for making a good car at one time, but they have been failures at football, but they cling to the franchise that so desperately needs a Jerry Jones or another owner who not only cares about football, but winning.
At least training camp starts soon for the Detroit Red Wings Stanley Cup winning hockey team.
Let's go Red Wings!
Posted by Jim of L-Town at 5:31 PM 3 comments: