My stepdaughter is home from Boston for the weekend, so not much time to blog today or the weekend, but Jim Carty at "Paper Tiger No More" has some interesting Newhouse/Booth information over there.
Posted by Jim of L-Town at 4:27 PM 6 comments:

From Editor and Publisher.
Posted by Jim of L-Town at 6:44 AM No comments:

I'm boiling the tar and plucking the feathers 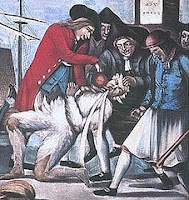 Last year, he asked us if we had purchased an energy efficient furnace in 2007, because we could have received a nice "green" tax break if we did. So last summer we replaced our 50 percent efficient 30-year-old furnace with a new 95 percent "green" furnace.
So we arrived in the tax guy's office with our receipts ready for our tax break. Wrong. Congress did not renew the "green" tax break for 2008, but now has renewed it for 2009. So our "green" purchase in 2008 does not qualify for the tax break because Congress decided 2008 didn't need to be "green."
What are these idiots smoking in D.C.?
On top of that, I made a little extra money with a part-time job last year and learned today that because I didn't pay quarterly FICA payments and tax payments, on top of the $2,300 I owe in taxes, Uncle Sam wants me to pay a $40 penalty for not filing quarterly, something I knew nothing about.
So, being the smart fellow that I always am, I asked the tax guy if I could plead the Tim Geitner defense that I didn't know. Wrong again. I guess unless you are being considered for a high government or cabinet position, you have no immunity from penalties even for something as ridiculous as not making quarterly payments on a little part-time job.
I just wish there was a big hole they would all fall in and stay in. So I'm wondering tonight how much President Obama's trip on Air Force One to appear on Jay Leno is going to cost the taxpayers and how little they really needed my extra $40.
Someone, please tell President Obama that he WON the election and therefore does not have to continue his election campaign. I want the guy to succeed, but please send a message of thrift and conservation by staying in that nice little White House the American taxpayers give you.
Rant officially over.
Posted by Jim of L-Town at 9:39 PM 17 comments:

Last day at the Seattle Post-Intelligencer 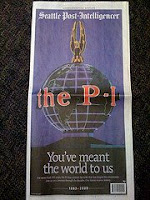 Newspaper Death Watch has a story on the last day of print publication for the Seattle Post-Intelligencer today. Included in the story is a link to a series of photos of the last day, which includes pictures of Photo Editor John Dickson, who was at one time the photo editor at the Flint Journal. It's all here.
Posted by Jim of L-Town at 1:08 PM 4 comments:

Here's a St. Paddy's Facebook gift sent to me by Jay Clothier, a great attorney with an even greater sense of humor (I have many of his t-shirts). So enjoy the day and the song.

How talented were you at 13?

The voice of an angel. Faryl Smith and she's only 13.

A frequent reader sent me a link to NPR's coverage today of the pending Booth actions. In it, the publisher comes closer (assuming he was quoted correctly) to admitting that production day cuts could be in the offing. The link is here.
Posted by Jim of L-Town at 3:22 PM 31 comments:

This is why I love "The Daily Show"

Jon Stewart does the job that many folks are afraid to do. If you haven't seen this interview (and you'll have to get through a 30-second Hulu ad to see it) with Mad Money's Jim Cramer, watch this segment and then see the whole thing at www.thedailyshow.com.

Federal bureaucrats and the death of common sense

Last April I built a wheelchair ramp for my father-in-law. With the strength of his legs failing it became necessary to quickly construct it because he was no longer able to negotiate the steps from the house to the garage.

While it was a labor of love, one that cost my in-laws nearly $800 in lumber and supplies, in the end the same thing could have been done for much less and with much less urgency.

Ditto for my brother, who died on New Year's Day, but I'll get to that story after I finish my father-in-law's tale.

My father-in-law is a World War II veteran, a member of the 75th Division that saw extensive action during the Battle of Bulge. In my mind, he and all the members of his generation are heroes for what they gave and sacrificed during that time.

About five years ago, I noticed that a neighbor two doors down had a metal wheelchair ramp installed. When I asked "Red" about it he mentioned that the Veteran's Administration installed it for his neighbor.

Two years ago, the neighbor died and the reason for the wheelchair ramp with it. Family members of the deceased veteran moved in.

So when the sudden need for a wheelchair ramp arose for my father-in-law we turned to the Veteran's Administration for help last year. But under the VA's red tape we discovered that my father-in-law's neighbor was a former Prisoner of War during World War II, which qualified him for the free ramp.

Because my father-in-law was neither on a military disability or a POW, he didn't qualify for the ramp, even though it was sitting two doors down being used by completely able non-veterans who moved into the deceased POW's home.

Every time we go back to Buffalo, it grates me that that "temporary" wheelchair ramp that was erected for a disabled World War II POW remains at a house two doors down from my father-in-law who was denied the ramp because he didn't qualify.

When we suggested (a year ago) that I could simply go down and move the ramp, we were told no, that they were coming to get it. Well, this is March 15, 2009 and the ramp is still there being used by people who don't need it, and certainly don't qualify for it.

Next, my brother, a Vietnam veteran, had a preliminary diagnosis of Post Traumatic Stress Disorder as a result of his service last year. At the time he died, he had a doctor's appointment in February to make the final approval for his military disability benefits.

He had been through a lot and his wife could certainly use the money, so she called to see if he qualified for any retroactive benefits. What she was told was that because he didn't make his February doctor's appointment he would now and forever be ineligible for the benefits.

Do you get the stupidity of that? Because my 57-year-old brother was so sick that he died before he could make his final doctor's appointment he was now forever unable to prove that he was really sick enough to get his benefits. Guess dying isn't enough proof.

I think even the bureaucrats who make these decisions must know in their heart, and minds, how stupid what they say, sounds to intelligent people.
Posted by Jim of L-Town at 8:18 PM 6 comments:

Back home from Buffalo

Back from Buffalo, all is quiet and the weather is great. A robin is digging worms in the backyard. A good sign.
Posted by Jim of L-Town at 2:56 PM No comments: