A photo for an old story 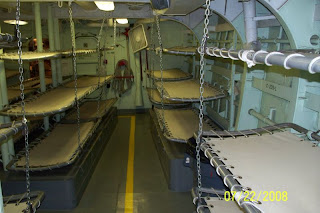 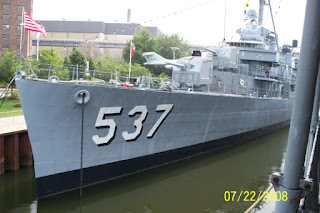 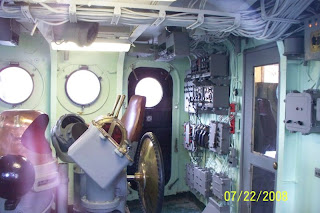 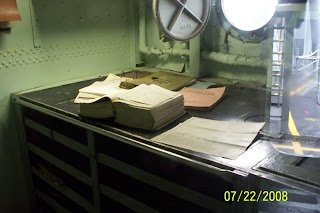 Previously, I've written about an incident that occurred on a Navy ship when I was 18. Instead of telling the whole story again, here is the link:

http://freefromeditors.blogspot.com/2008/05/in-memory-and-honor-of-patricia-my-mom.html
While in Buffalo this time I went down to the Naval Park, which only recently re-opened after major construction and renovation. One of my favorite exhibits (if you can call an entire ship an exhibit) is the USS Sullivans, DD-537. While a little older than either of my two destroyers, it is a carbon copy of my first one, the USS Cogswell, DD651.
I took a bunch of pictures (170 to be exact) of the Sullivans, the USS Little Rock and the submarine SSN Croaker which are also on display.
Just to give you a picture of where I was when my mother made her fateful pronouncement I am including a picture of the bridge (wheelhouse) of the Sullivans. Now the destroyer I was serving on when my mother embarrassed me had just a little more room behind the wheel than what you see in the photo.
I'm also including a photo of the little chart room where I did my regular work off watch and also a picture of the tight sleeping quarters.
Hope you enjoy these. Also if you are ever in Buffalo, and why would you be unless you knew someone here, do stop by the Naval Park as it has a number of interesting military exhibits, even apart from the three Navy vessels.
By the way, the USS Sullivans was named after five brothers who were sunk and drowned while serving together in World War II on the USS Juneau. Their story became a major wartime motion picture, which you can probably rent somewhere. I know I have, but it has been years.
Posted by Jim of L-Town at 3:11 PM 2 comments: 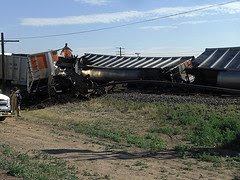 Someone was asking me recently where things went off the rails for the Flint Journal. The answer is complex. To be completely frank, the Journal is no different than other newspapers in the country in that it is caught in an historic moment.

All newspapers are facing the stark reality of potential extinction. They are in much the same position as say the buggy whip manufacturers of 1896. But where many buggy whip and carriage makers went under, a few, including some notable ones in Flint, found a way to move into the new motorized technology of the early 1900s. They adapted.
So far, the Journal like hundreds of other newspapers, has not adapted. Far from it. While part is due to the new age of technology, another part of it was a failure of leadership.
Since the late 1990s, the Journal has been led by two publishers and three editors. The new editors, brought in just after the arrival of new publishers, came with great enthusiasm and a promise to revamp the newsroom and do things in a new way.
What they did was listen (too much in my way of thinking) to the staid opinions of the old operational management of the paper. As soon as the new editor arrived we reporters watched as the second tier editors beat a path to the new editor's door, presumably to cement their positions with the new boss. There was a whole lot of rear end kissing going on. I must also say that not all the editors were so smart or brash and many paid the price for not spending more time at the boss's feet. Most of them, interestingly, were women. I still believe there's a sex discrimination suit waiting to be filed, but that's a topic for another time.
Not that there weren't shake-ups, there were. But the shake-ups always involved moving reporters around like chess pieces. Unfortunately, they moved pawns like knights and castles like bishops. The beat changes they made were ill-thought out and clumsily executed. Instead of reforming the newsroom into a highly motivated cadre of eager reporters, they turned the room into smirking, cynical and angry employees (admittedly some of us were already well on the way to cynical).
The top editors obviously never suggested to the new boss that perhaps they had been the problem with the newspaper operation. So with the changes in top leadership, there was no change in the actual newsroom leadership of the paper.
I don't blame the apple-polishing editors who beat a path to the editor's door. Heck, they were only protecting their own hides. But for a new editor to arrive on the scene with the charge to improve the newspaper and keep the management core intact was ludicrous. If I had been the new publisher I think I would have questioned that at some point.
Let's just say I had been brought in to lead the newsroom (a possibility somewhere between fantasy and fat chance, I know). The new publisher tells me, the new editor, he wants things to improve. He wants the paper to flourish and the recent declines to be reversed.
My first order of business would be to look long and hard at those folks who had performed at the management level below mine and find out why they were not getting the job done. Then I would solicit from the reporters what they saw as the problems in the newsroom and suggestions for improvement.
Actually, the current editor did that, but well after his head was full of the crud filed there by a couple nervous managers. Some of us told him where the real problems with the Journal were. I know I was very frank with him about the lack of managerial talents of at least two of his top editors. One of my suggestions was that he put two of his male editors back on the street so they could actually learn what reporting was all about. He gave me that grim smile and annoying up-and-down head bob that seemed to say he was agreeing with me, or at least considering what I was saying. He even told me to wait that I would see a lot of changes, just give him time. Well, not so much.
Like his predecessor he went along with a destructive shake-up of newsroom beats, but never bothered to address the real dearth of leadership with his first lieutenants. Shame on him. One editor told me they decided not to post beat openings and solicit reporter preferences "because it would cause too much drama." Well what they got by not posting the openings and simply assigning them to beats that most of them had not interest in, was a full fledged performance of "King Lear."
All this to say, that nothing would have forestalled much of the Journal's downturn, but better leadership, aggressive news reporting and more inspired leadership might have provided a slower downturn and maybe, just maybe, the imagination that would have found a better online presence and rewarded a loyal readership and advertisers that might have stuck with the paper longer.
Instead, the folks that thought features like "Making a Difference," or "Golden Apples," or endless Lakisha Jones stories were left to neuter the paper of any aggressiveness or advocacy. Some politicians were treated with kid gloves because mama owned a car dealership and bad news was downplayed or ignored, because some editors were not really into it. Bad decisions all.
When the buyouts came, many good people, some who really wanted to stay, were pushed out by the same leadership that has done little or nothing to lead in a positive way the newspaper into the 21st century.
Guess what's left? The same tired, vacant leaders who have run the paper for a dozen or more years. You would think a bright publisher might have caught on, but they are too busy counting fewer and fewer beans.
Posted by Jim of L-Town at 12:30 PM 4 comments: