Cheers Mike, we miss you 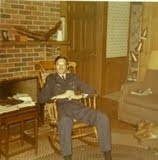 hardly seems possible, but it is one year to the day that my brother Mike died. I received word of his death in California from my sister-in-law just as I arrived at Detroit Metropolitan Airport about 7 a.m. to catch my flight. 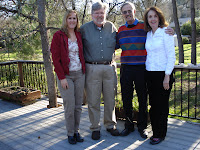 of reasons, I have been anxious to put 2009 behind us, but no reason greater than the loss of my brother on New Year's Day 2009.

With the news grim on New Year's Eve, I tried to find a flight out to see him before he died, but the best I could do was an early morning Southwest flight to Oakland. We talked on the phone early on New Year's Eve Day and he was aware that things weren't good and we said our good-byes. He was still insisting I not make the trip out. It was a request I knew I could not honor.

Fortunately, my sister-in-law Barbara had a long time friend with her when the end came. The next couple days were filled with arrangements and putting away Christmas decorations that my brother had put out just a few weeks before.

It was not until three days later that I realized I had missed the New Year's Day bowl game of my beloved Michigan State Spartans. I didn't know if they had won or lost (they lost) and frankly forgot who they played. It's amazing how priorities can change in an instant.

But when I finally did remember the game I had missed, I remembered another game my brother and I had attended. It was a late season game at Spartan Stadium. He arrived on a flight from California in the morning and we drove straight to the stadium. At the time he was dressed in a spring jacket and dress shoes and as I recall the temps were below freezing.

MSU was winning the game going away (MSU vs. Iowa, November 25, 1978, final score 42-7), but despite his pleadings I said we had to stay to the end. A slight fellow, my brother was very cold and was very happy when we got back to my warm apartment.

But I couldn't help but smile when I thought maybe, just maybe, he left me on New Year's just so I would miss that bowl game and he would get the last laugh over a game I made him stay at long after he wanted to leave.

Today, will be tough for a lot of those folks who loved Mike. We were apart far too long until we reconnected a few years ago. It's very hard to believe my little brother is gone, but I'm warmed by the memories I have of him, even the "cold" ones.

If you get a chance today, reach out to a loved one you haven't seen or talked to in awhile. You won't regret it.

Happy New Year! A little disco retro for your pleasure

A2Politico weighs in with some ?? about AnnArbor.com

Wondering about the health of AnnArbor.com? Well, so is A2Politico.com, but the answers are few and far between.
Posted by Jim of L-Town at 4:12 PM 4 comments:

Someone has compiled their top 91 journalism blogs of 2009. A few that I had not seen before.
Posted by Jim of L-Town at 3:12 PM No comments:

As a service to FFE readers (and myself) I'm posting a link here to the ESPN past, current and future 2009-2010 college football bowl game schedule.

It includes the scores of the many bowl games already played.

Thank goodness for a new battery in the DISH remote.

If you are not into football, go to the AMC channel today. 24-hour Three Stooges marathon.
Posted by Jim of L-Town at 7:43 AM No comments:

Not good news for many staff members at the Washington Times on Wednesday.
Posted by Jim of L-Town at 7:40 AM 1 comment:

Even Mr. Spock got in the act back then

Here's a PSA or something done by Leonard Nimoy (Mr. Spock), of Star Trek fame, about the coming Y2K disaster. Now all we have to worry about is the new 2012 "end-of-the-world" theory in two years.

My objection to all these media hypes, and where I agree with Slate.com, is that all the "chicken little" stuff that the media does simply desensitizes people to the time that a real disaster may come.

Y2K: Nike had it right

Y2K: Overkill of all overkills

It seems impossible, but it was ten years ago tonight that the news business lost its collective mind.

(Update: For an opposing view go this blog)

Fueled by months of hype and ridiculous predictions, broadcast and print media tried to outdo each other with angles on the Y2K scare that in today's light seem cartoonish.

The Flint Journal was no exception. I bowed out. I'm not one for hype and I prefer to work the holidays alone. So I was not one of those who volunteered to man the newsroom to watch the end-of-the-world-as-we-knew-it story unfold.

The metro editor was not happy that I was skeptical of all his efforts to find more and more angles to this story. It seemed to me, rightly so as it turned out, that nothing was going to happen. That somehow the worst thing that might occur is that a clock or two might suddenly reset to 1900, but I was not among those who believed the power grid would fail, that the lights would go out in Georgia and everywhere else and that we would be plunged into World War III.

So while my wife and I enjoyed a night dining and dancing at the local American Legion Hall, many of my colleagues were gladly taking triple time pay to cover the end of the world.

One reporter was assigned to stay with a Lapeer County survivalist family in their underground, well-stocked bunker. The couple predicted they would be overrun by unprepared neighbors, but were ready to meet the assault with firearms and sturdy locks.

How silly it must have felt for them to crawl out the next morning with their neighbors snug in bed.

But there were reporters at City Hall, at the police department, and stationed throughout the county waiting for the predicted disaster that never came. What no one ever was willing to answer was the question of where the newspaper would be printed if the disaster the editors so anticipated actually happened.

My wife and I left the smokey Legion Hall early and watched Peter Jennings on ABC welcome in the new year from around the world, each hour on the hour. The reporters were almost disappointed to report that no problems, power outages, or riots had occurred anywhere.

When the clock rolled around to midnight here in the Eastern time zone, the lights stayed on, the computers and clocks still worked and Y2K fizzled like a wet firecracker.

I lifted a non-alcoholic beverage to my wife and toasted my good sense in staying home that night.
Posted by Jim of L-Town at 3:24 AM 6 comments:

The latest reason why I detest both parties

Here is a New Yorks Times article on the back and forth between Republicans and Democrats over the latest terrorist incident on Christmas.

The latest involves the incredibly stupid comment made by Homeland Security head Janet Napolitano during the news shows Sunday that the security "system worked." She and the President have been backtracking ever since, but the damage was done.

The comment drew comparisons to the situation during Katrina when President Bush commended FEMA's Mike Brown only to fire him two weeks later.

One could also make a comparison to President Bush staying on vacation and being criticized by Dems and President Obama spending his holiday on a golf course immediately after issuing a statement on a near homemade disaster in Detroit.

The Times article does a good job of taking apart the hypocrisy of both sides better than I could do, but it simply further explains why both parties are off my list.

As for my opinion, Napolitano deserves Mike Brown's fate, if for no other reason than to show that President Obama will not stand for incompetence in such an urgent area.
Posted by Jim of L-Town at 1:24 PM 2 comments: 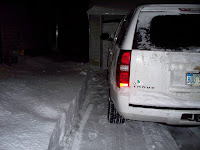 We have had incredible luck coming to Buffalo in the winter to visit the folks. But the last two winter trips have resulted in us being here for major snow storms. Well, not major in the Buffalo sense, but in our own sense. 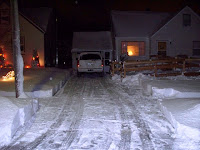 Today we received 12-inches at the Buffalo Villa, but the road crews here are extremely efficient and our very good neighbor took care of the driveway while we were visiting mom at the nursing home.

Here's a couple photos, and yes, that is the Buffalo Villa in the background of one of them. More like a Chalet today.
Posted by Jim of L-Town at 8:08 PM No comments:

Curious use of bylines in Bay City Times

Bay City Times Staff produces 2009 Fashion Moments List, except the note at the bottom shows a Washington Post credit. And this one.

This came to me from a reader. It's a curious use of byline credit. Normally, a story taken from a news sydicate would be at the top of the story, not at the end. And putting a Bay City Times staff byline on it implies it was compiled by that paper.

Maybe just a mistake, but curious just the same.
Posted by Jim of L-Town at 4:39 PM 7 comments: