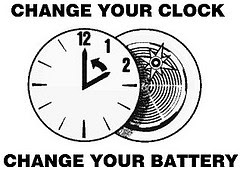 Turn those clocks forward (ignore the incorrect instructions on the graphic to the left but it's the only good illustration I could find) before you turn in tonight.

There may yet be hope 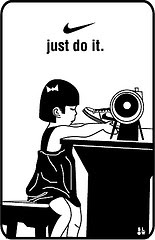 
I'm hoping my friends still in the business keep track of the real hours they work. Someday a class action suit will be filed with the State of Michigan and a lot of them should get some nice retro and overtime pay.

It is simply wrong that a newspaper should require workers to work beyond the hours allowed in state law. Someone should call the state and complain. Maybe I'll have time next week.
I should have organized a union there years ago.
Posted by Jim of L-Town at 9:38 PM 2 comments:

This was very nice:

Something soothing to get you ready for the weekend:

Remember to watch in full screen. (Click on button on right hand corner of the You Tube screen)
Posted by Jim of L-Town at 3:28 PM No comments:

Watch this clip with an on air confrontation between a reporter and an anchor. It is very funny.

This one is good, with some great clips of Sam Donaldson:

I know this isn't right, but I smiled anyway:

http://youtube.com/watch?v=sw6vxe74KmI&feature=related
Posted by Jim of L-Town at 1:52 PM No comments:

Corrections with a flair and a little humor

If you haven't gone over and checked out regrettheerror.com you are missing some great reading. Here are a few examples. What I really like is that many major newspapers go into great detail on how the error happened and who is responsible. Refreshing that some newspapers are willing to go the extra mile to clear up mistakes. Do yourself a favor and check out this website frequently.


(From the Express-News)
Police photo error implicates wrong man
Because of an incorrect photo provided by the Bexar County Sheriff’s Office, a Tuesday Express-News story about a slaying suspect was accompanied by a photograph of a San Antonio man who was not connected in any way with the slaying. The story, ‘Transient’s tale ends in arrest,’ was published on Page 1A. The photo did not appear on MySanAntonio.com.The actual suspect, Robert Patrick White, 38, described by police as a homeless man, is pictured here. White and two others have been charged with the slaying earlier this month of Christopher Duncan, a 23-year-old South Side man.‘The wrong photo was in the wrong data file,’ Ralph G. Serrano, manager of the central records and identification section of the Sheriff’s Office, said in an e-mail to the Express-News. ‘I apologize for any embarrassment or inconvenience that this may have caused.’The Express-News also apologizes to the misidentified man, his family and friends and to our readers. Link
And the misidentified man is…?
Thanks, Craig!

(From the guardian)
Lessons in geography etc.
Mount Baldy, where Leonard Cohen spent time at a Buddhist retreat, is not in Greece, but in the San Gabriel mountains, about 40 miles from Los Angeles (Hail, hail, rock’n'roll, page 14, Film & Music, February 29).
By Craig Silverman on March 4th, 2008 in Newspapers Tagged geographical errors, guardian Comments (0)

(Sidebar: I have been on Mount Baldy during my years growing up in Los Angeles and can confirm it is nowhere near Greece!)

At least some newspapers are honest enough to report there own bad news:

There's more over at newspaper deathwatch.com.
Posted by Jim of L-Town at 12:56 PM 1 comment:

Not everyone is unhappy 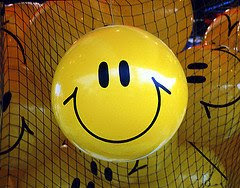 Just to be fair, here's a new site:

We'll see whether it eclipses the overwhelming number of comments on AngryJournalist.com
Posted by Jim of L-Town at 7:53 AM No comments:

The editor-in-charge-of-corrections weighed in Sunday on his recent decision to create a controversy where none previously existed.

A Genesee County school district sent out a mailer warning parents that a suspected sexual offender, who the school did not name, was living in the district near a school. Parents were apparently happy for the information.

That's when the editor-in-charge-of-corrections decided to ramp up a controversy by first, naming and picturing the accused sex offender in the newspaper, and then seeking someone, anyone, who would call the school's letter a violation of the alleged sex offender's privacy.

Locally, apparently, they could find no one to weigh in with that opinion, so they went to New York and Human Rights Watch who criticized the district for the letter.

This technique is popular among editors devoid of real news sense. It's the "I'll hold your coat" style of journalism. A reporter tells one source that another person/organization has done something offensive to it/them. That prompts a reaction from the uninvolved individual, who then weighs in with a salvo of theirs against the "other" side. Back and forth it goes as two people/organizations who previously had no issues with each other fight it out in public, while the newspaper "holds their coats." It's a cheap technique, one not worthy a good newspaper.

There are plenty of ongoing fights that don't need fabricating that can be covered, but when the news cupboard is bare, this one can be used in a pinch. Then after all the dust dies down some vacuum headed editor can then opine in public about how important it was that they started the fight to begin with.

I had my own such issue, just a year ago, over a proposed rabbit farm in Lapeer County. Not just any rabbit farm, but one which produces pathogen-free rabbits for use in university medical schools for high end research. These animals are used in critical cancer research and must be 100 percent free of any disease, virus or pathogens of any kind.

Potential neighbors of the facility raised an issue of truck noise and odors, but no one was concerned about any animal rights issues. That's when the editor-in-charge-of-corrections stepped in and decided that I should call People for the Ethical Treatment of Animals and let them weigh in, even though no such issue existed.

Newspapers, particularly the Flint Journal, ramp up controversies all the time. They do so for a variety of reasons, many of them are good reasons and sales of newspapers is one of them. (We'll get back to that in a minute).

Trust me on this, if for some reason the school district knew about a suspected sex offender - and then didn't inform the public - the eicoc would have been the first to have a reporter jump on them with both feet for NOT doing so. The eicoc is a bully, he is a bully in the newsroom and a bully in the community, one he doesn't even live in. The eicoc lives far outside the Journal's subscription area and has for ten or more years.

That's really interesting because the eicoc has assigned and required stories about the residency of many local officials and employees. He's singularly obsessed with how much every public employee makes, but try and get that, or any other information, about how much he or anyone else makes at the newspaper.

With the loss of many veteran reporters, those who couldn't be bullied, look for more such stories in the future.

Now let's talk just a minute about the eicoc's bold statement that he has never heard anyone assign a story based on selling newspapers.

Heck just in the last week, the Flint Journal has spent countless inches promoting "Semi-Pro" an awful movie (people who have seen it have warned me away from wasting my money) and for what other reason than to sell newspapers to the fools who believed they were going to appear in it as extras.

I was in the business for 30 years, I never apologized for the fact the point of the business was to sell newspapers. Heck, GM certainly doesn't apologize for selling cars, do they? But to say boldly as the eicoc did Sunday that he has "never" heard that is very startling.

Maybe a correction is in order? But as the eicoc says, anything that "stirs" discussion is good.
Posted by Jim of L-Town at 8:51 AM 6 comments: