Me, Ed and a skimpy nightgown 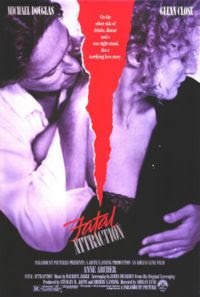 Talk about your eye-poppin' assignment. Sometime about 1987 I was working on a story about a Rochester Hills woman who had been mercilessly stalking an attorney.
The woman was so taken with the attorney, who was happily married and wanted nothing to do with Judith W. (I'm going to hold back her last name in case she's listening) and eventually she was arrested.
The arrest occurred after Judith showed up to the attorney's Rochester Hills home wearing nothing but a fur coat and a smile. All this while the attorney's wife was at home.
At the time there was a popular movie "Fatal Attraction" with Michael Douglas and Glenn Close that had every man reconsidering any temptation to stray.
Naturally the story was dubbed "The Fatal Attraction" case for obvious reasons. On a whim, I called the woman's Rochester Hills home after she was arraigned and bonded out of jail and she answered. I pitched an interview and to my surprise she agreed. Pushing the issue, I asked if I could bring a photographer. Again she was more than cooperative.
Chief Photographer Ed Noble and I met at her condo in Rochester Hills and approached the front door. Judith met us at the door in a see-through teddy that barely covered, well barely covered anything. She said she wanted us to show her at her best and invited us inside.
Considering the woman's alleged history, we declined the invitation to enter her home, but Ed got her to pose in all her glory by a tree in front of her condo, which brought some strange inquiring looks from the neighbors.
At one point, it was cool outside, she slipped on a short fur coat and Ed snapped a few shots with the fur, which was a good thing because the prudes at the office almost immediately nixed any of the skimpy nightgown photos for the front page story that was to come.
The interview went well, we had our pictures and we headed back to the office.
Editors who had been thrilled that I had secured the interview quickly began to second guess the whole thing when they saw the pictures and read her quotes.
"Do you think we're exploiting her?," an editor asked me. Since when did we worry about that?, I asked
After some hand wringing and careful editing the story survived mostly intact, but alas, the sexy photos did not. The photo that ran in the Oakland Press was a well cropped photo of Judith in her fur. The Oakland Press could have sold an extra 5,000 copies if they had used Ed's best photos.
Ed and I, with permission from an editor, did make a few extra bucks selling the sexy photos and better quotes to "The Weekly World News" which did a big splash on the story with the better photos.
The story actually got stranger as it went through court. Judith was hauled before a circuit judge, who despite Judith's history took a shine to her and began dating her.
When the relationship with the judge soured, she appeared in his courtroom and in front of attorneys and spectators announced that she still loved him and believed she was carrying his baby, which was a lie.
The whole episode erupted into a very embarrassing episode for the judge who had to admit he carried on an inappropriate relationship with a person who had appeared before him.
This was one of a series of "wacky women" stories I did at the Oakland Press. Next up, the lottery lady and at some point I'll tell the strange story of the Farmington Hills woman scammed out of thousands of dollars by a man pretending to be "Randy Bachman" of Bachman, Turner Overdive fame.
Posted by Jim of L-Town at 9:13 PM No comments:

And the winner is...

Everyone likes a pat on the back, but no one loves it more than newspaper managers who have helped create a system of contests that rewards imitation and ignores innovation or humor.

Aside from the Pulitzer Prize, most of the annual journalism contests end with predictable winners and prize winning stories that most readers never fully digested.

"Contest packages" as they are sometimes called in the business often consume excessive inches of newsprint on stories, graphics and pictures that are aimed not at interesting readers, but dazzling contest judges.

This will sound crass, and I don't mean it to, but one of the surest ways to win a press association or associated press annual award is to find a burn victim with shockingly serious wounds and follow them through rehabilitation.

Substitute any gross disfigurement and the result is the same.

Contest editors routinely reward news reporters and photographers who follow that rehab or "shock-the-reader" template. To me, it is exploitive and frankly, an easy way to an award.

Understand that newspaper contests are generally judged by other newspaper editors.

This is how it works, a state press association finds a group of editors in another state, sends contest entries from their state. At some point the editors, who suppposedly have read all the entries and sidebars, sit around a big table and wax brightly about which are the best.

They settle on the top three stories, rank them first, second, third and then fire off a notification and some brass plaques and the paper then features the contest winners in the next Sunday paper. Of course the awards are given in a variety of categories based on circulation numbers and just about everyone is going to have a plaque or two to brag about.

Again it's a big "whoopee!" for the paper, but I'm not sure that it really impresses readers.

During my 30-year career I wrote a light, sometimes humorous column - "Off Beat" - on the antics of dumb criminals and some of the funny things that would come up on the police beat. It was well read and people seemed to like it.

But that column would never win an award. Even though it was popular with readers it would never get a moment's notice from a contest committee.

Columns that are rewarded by contest committees are the dark, emotional personal recollections of death and tragedy. Contest editors salivate over those.

The Pulitzer Prize - and I'm hoping the Detroit Free Press gets a shot with its Mayor Kwame Kilpatrick coverage - is really the only journalism award that means something. And even that has an element of fate involved.

Winners of the Pulitzer Prize have usually been newspapers who have covered an extreme events - 9/11 - the Oklahoma City bombing - Columbine shootings - Hurricane Katrina, etc. But at least the Pulitzer honors real news reporting on a real news event and not some feature or investigative piece borrowed from last year's contest winners.

It's not that I haven't won a few awards myself, I've got several brass plaques stored away in boxes in the attic. It's just that the stories attached to them were not my favorite assignments.

The truth is my best reporting and writing was done on the day-to-day breaking news coverage that rarely wins awards.
Posted by Jim of L-Town at 10:57 AM No comments:

Gone with the wind 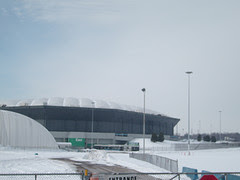 All this Oakland Press talk reminded me of a great story I covered in Pontiac back in March 1985.
A wet, heavy snowfall piled up on the roof of the Silverdome. As I recall the fans and pressure units in the Silverdome either were not up to full capacity or failed. Whatever the reason about 11:45 a.m. the large "muffin" cover over the Silverdome collapsed.
Ice and snow rained down onto the seats and field, nearly hitting Detroit Lions quarterback Eric Hipple who was playing a little spring pitch and catch on the Silverdome floor at the time.
Reporter Julie Jacobson and I heard the police dispatch and we headed out the door and into my car for the Silverdome. We were right on our final deadline.
Sidebar: Before afternoon newspapers were overtaken by computer technology our late deadlines ran almost to noon. Translation, we could get breaking news into the newspaper right up until noon. After all the great technology came to being, our deadlines slowly eroded until the afternoon paper had to be wrapped up by 8:30 a.m. Go figure!
Back to the Silverdome. Julie and I raced east on M-59 and I remember my reaction as we crested a hill and the familiar "muffin top" of the Silverdome was gone. "Holy, crap," I said.
Pulling into the expansive parking lot, we both rushed to find someone, anyone, who could give us a quick lede and quote so we could call in the breaking story.
By noon, Julie and I were at pay phones (this was well before we had cell phones) calling in to a rewrite person (Jean Saile, I believe) so we could remake Page 1 with the breaking story.
Photo editor Ed Noble, who was one of the finest newspaper photographers I ever worked with, wanted to get a photographer up above the Silverdome for an aerial shot. In those days, the Oakland Press was a Captial Cities/ABC property as was WJR radio.
WJR had a helicopter for traffic and the pilot requested we get permission for him from Silverdome officials to land on the Silverdome parking lot.
I found Clayton Jones, then the executive director of the Silverdome, sipping wine in the Elias restaurant in the Silverdome, but I was pretty sure if I asked him straight up for permission he would say no. Reporters learn that most people will naturally gravitate to "no" rather than yes. So the trick is to ask a question in such a way that "no" means "yes."
"Mr. Jones, if we land a helicopter on your parking lot you won't shoot it down, will you?," I asked.
Puzzled, Jones said he wouldn't shoot down a helicopter. That sounded like a "yes" to me and I told Ed we had permission to land, although if anyone knew how obtuse a question I had asked they probably would have fired me.
When the helicopter came down to the parking lot, Mr. Jones asked "who let that guy land here?" I reminded him that I had asked him about landing a helicopter and that he said it was OK. He looked puzzled, but didn't argue further and we got our picture.
During the next few days, high winds further shredded the roof leaving a $10 million roof in tatters.
In the weeks and months to come the story about the repair consumed a lot of our coverage, but I'll never forget that first few hours of that Silverdome collapse.
Next, I'll tell you about the "Fatal Attraction" lady in Rochester Hills who met Ed Noble and I in her "teddy" for a photo at her front door. Oh yeah, that was also a day to remember.
Posted by Jim of L-Town at 8:58 PM No comments: