Paige Wiser a reviewer/columnist in Chicago has lost her gig over an ethical violation. The older I get the more I wish we could cut folks a little slack over a one-time issue.

Here's another link to information about the story.

Let's not forget that Mitch Albom, an award-winning columnist for the Detroit Free Press got a pass from doing pretty much the same thing when he wrote a column implying he was at an event when he was actually somewhere else.

Like Albom, I think Wiser may have deserved a reprimand, but a second chance.

Here's another link that mentions that she only agreed to cover the event after she got an agreement from her editor to take her children. It was one of her children getting sick that forced her to leave the concert early.
Posted by Jim of L-Town at 6:41 PM 8 comments:

The old mailroom circa 1960s 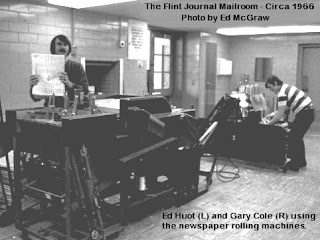