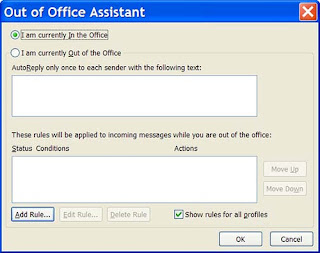 My cousin Cynthia in California sent me the following "out of office" messages. They are pretty good. The one I should have left is the last one, number 9.
Enjoy.
1. I am currently out of the office at a job interview and will reply to you if I fail to get the position. Please be prepared for my mood.
2. You are receiving this automatic notification because I am out of the office. If I was in, chances are you wouldn't have received anything at all.
3. Sorry to have missed you, but I'm at the doctor's having my brain and heart removed so I can be promoted to our management team.
4. I will be unable to delete all the emails you send me until I return from vacation. Please be patient, and your mail will be deleted in the order it was received.
5. Thank you for your email. Your credit card has been charged $5.99 for the first 10 words and $1.99 for each additional word in your message.
6. The email server is unable to verify your server connection. Your message has not been delivered. Please restart your computer and try sending again. (The beauty of this is that when you return, you can see who did this over and over and over...)
7. Thank you for your message, which has been added to a queuing system. You are currently in 352nd place, and can expect to receive a reply in approximately 19 weeks.
8. Hi, I'm thinking about what you've just sent me. Please wait by your PC for my response.
9. I've run away to join a different circus.
Posted by Jim of L-Town at 10:14 AM No comments: 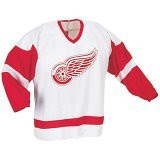 In my off time I really like to watch and root for the Detroit Red Wings hockey team.

Last night they disposed of their once fierce rivals the Colorado Avalanche in four relatively easy contests. This morning they finished off the Avs with an 8-2 drubbing.

Dave, a friend of mine in Lansing, kind of huffed and puffed when I said the Red Wings would sweep the series after the second game win in Detroit.

It's easy to pick a sweep after the third straight win, but not-so-easy after the second win at home. But then that's the way I roll. I kick it old school, as they say.

So I don't know yet who we will face in the conference finals, but I'm pretty confident that we will do well. Especially with the way Datsyuk, Zetterberg and Franzen are currently playing.

Franzen, for those who know little or care little about hockey, scored three goals (hat trick) in two of the games against Colorado. Almost unheard of in hockey circles.

So pardon this brief interruption in the newspaper talk, but it's always a wonderful thing when the calendar says May and the Red Wings are still playing.
Posted by Jim of L-Town at 7:15 AM 2 comments: 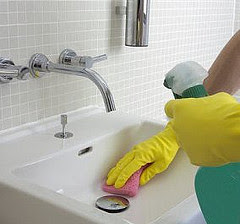 Regrettheerror.com has an interesting article on a recent Internet error by a news site that created a buzz and then was "scrubbed" without comment or correction by the news organization.
There were some discussions of this when I was at the Journal and the final take was that there was no need to issue corrections on line. There are often mistakes, some are simple typos that probably don't require a correction, which are simply fixed and not acknowledged.
The problem is that frequent visitors to the site may only see the incorrect version. Regrettheerror.com tracks news sites that do, and do not, issue corrections. So far, the Flint Journal (probably not a significant enough publication) is not listed on the roster there.

http://www.regrettheerror.com/uncategorized/ny-daily-news-tries-to-scrub-away-a-bad-error
Posted by Jim of L-Town at 7:10 AM No comments:

A blast from the past 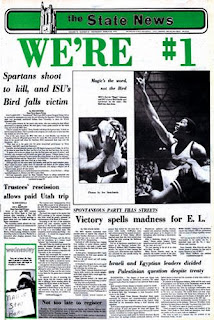 Going through a major State News nostalgia period. While visiting the State News offices Friday I spotted a front page I helped design 30 years ago on the occasion of the Spartans winning the National Championship.
Here's what I posted on the State News Alumni Association website:
I was editor when this page was created. MSU was just coming off Spring Break when the Spartans won the National Championship.
State News editor and a photographer were at the finals in Salt Lake City and many of us began working on the edition to come out the day students returned from break.
In those days we were limited to the fonts available at the comp shop and had to photographically blow up the "We're #1" twice the size of the 72-point size available to us. To make the "#" sign composing foreman Jerry Dunn built it from dark tape because there was no such headline symbol available.
"Magic's the word, not the Bird" was obviously in reference to the growing rivalry between Magic and Larry Byrd which only grew during their professional careers. As I recall, General Manager Mr. Coy, authorized the overprinting of 3,000 copies which were delivered to Jud Heathcote for use in future recruiting efforts.
Unfortunately I did not save a copy for myself, but enjoy seeing it hanging on the newsroom wall when I visit the State News in East Lansing. Not so famous was the second section, which was a recounting of all the games leading up to the finals (remember we were on break and not publishing during much of March madness) and after much debate about being too much of a "homer" we went ahead and screened a block "S" onto the front page of the second section.
As I recall we won a design award for the front page and design. It was an intense, but fun time at the State News.
As I recall, but could be wrong, Joe Centers called in the story from Salt Lake and the photos were transmitted through an arrangement with the Associated Press.
Jim Smith, editor 1978-79
Posted by Jim of L-Town at 8:58 PM No comments: