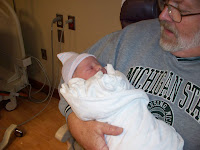 Sorry for the blogging hiatus, but returning from our trip left me scrambling at work and at home. Not to mention that it took me several days to catch up on my sleep from our long flight home.

I'm sorting through e-mails and information and I'll post some of that information on Sunday night.
There has been a little excitement here as well with the birth of Griffen Harry, our third grandchild and first boy at 12:21 p.m. Friday, 10-09-09. Griffen (the "en" continues the tradition that started with Addisen) checked in at 9 pounds, 1 ounce.
He has blondish, red-hair which could be traced to his recently departed great-grandfather, Red.
Mother, baby, father and Big Sister Addisen all doing fine and very happy. As I did with Addisen I introduced myself to Griffen wearing my Michigan State sweatshirt. It's important to start the indoctrination early.
Life is good.
Posted by Jim of L-Town at 8:06 AM 8 comments: 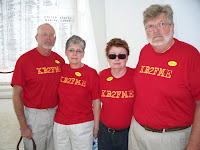 In honor of my father-in-law his two daughters and sons-in-laws wore special t-shirts to the USS Arizona Memorial in Pearl Harbor last month. The t-shirts were designed and made by my step-son, John. The color red was picked because of my father-in-law's nickname and the KB2FME lettering was his HAM radio call sign, so a tip to his favorite hobby. The picture was taken in the room where the names of the dead sailors are inscribed on the wall.

Also, while we were gone, the other daughter, Patty, continued her quest through his many journals. Here's the latest installment. Many of these are from before the time he was sick.
"I don't worry much, but i fret much more"
"Opposites attract but are not compatible"
"Every day you learn something new about yourself"
"Make yourself happy, for the moment"
"Everyday is a good day as long as you are breathing"
"Aging is when your farther from the beginning and closer to the END."
"The older I get, the more Philosophic I get"
"Parents ruin more children than any other source"
"What I need most in life I never got" (Perhaps a reference to his mother leaving him when he was just a baby)
"I don't know where I'm going but I sure know where I'm going to end up"
"All the problems of life are man made"
"Time alone is to please no one but yourself"
"By the time you smartin' up, you're dead"
"I'll survive until I die"
"Dont' wake up mad, it's a long day"
"Being a nothing, I wish I never existed"
"I whine because the Beer isn't Cold"
"If you look at twins, one always looks older than the other"
"Money is only a problem when you don't have it. Relations are only a problem when you have them"
"Patience is a virtue. Patience is also virginity"
"It all has to do with nothing"
"If you can't remember it, forget it"
"The reason most comics get divorced is because their wives laugh at them"
"Dieing is no way to live"
"God, self and others"
"If I wake up, I hope it's 6AM"
"It's locust time for the politicians"
"We're all an island onto ourselves"
"Life is never dull, we make it so"
"Willie wouldn't be Willie if he wasn't"
"God made man, then he goofed"
"Tis easier to receive than transmit" (A HAM reference)
"What am I doing? Reneging food for thought"
"That person's seen both sides of the dam. That person's been on both sides of the dam."
"What don't work, I shall try again"
"People go from one bad habit to the next"
"I have been, so I am eternal"
"It's almost impossible to get to be 60 years old and not enjoy some parts of life"
"Why Criticism? Criticism is a compliment: it shows that you have done something too important for a critic to ignore."
"Diane fainted- she was shot from the shot" (flu shot story reference)
"Peace is the time, when the kids go to bed and before the parents go to bed"
More to come.
Posted by Jim of L-Town at 9:30 AM 4 comments: