Never on Sunday, sometimes on a Monday.... 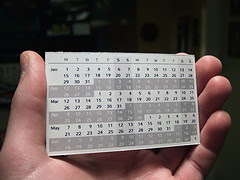 Newspaperdeathwatch.com is reporting an emerging new newspaper trend. Some newspapers are exploring and one is even starting a new publishing schedule that eliminates more unprofitable days, such as Monday or Tuesday editions.
Don't know if you can still call a newspaper a daily, if it skips a day or two, but apparently newspaperdeathwatch.com is seeing the start of a new trend.
It notes that the cuts will likely never include the Sunday editions, the most popular days of the week for advertising.
Posted by Jim of L-Town at 8:52 AM No comments:

For those who may have tuned her in the last 24 hours and read the two newest posts, I have adjusted one of them by removing the last name of the reporter named Robyn.
I did that because while everyone closely connected will know who I'm talking about, it's probably not right for me to post her last name there without her permission.
Unlike the Flint Journal website, I won't hide my mistakes or adjustments. So if you wondered why the last name disappeared. Well, now you know.
Posted by Jim of L-Town at 2:49 PM No comments:

A tale of two stories

Headlines change (see beetle story below on the blog) and sometimes the story is rewritten or corrected.

On Wednesday there was a perfect example of that. This is the story that appeared online:


Flint makes another 'worst' list
by Bryn Mickle The Flint Journal
Tuesday May 20, 2008, 8:58 PM
FLINT, Michigan -- Once again, Flint has found itself the recipient of a rather dubious distinction.
The new issue of the men's magazine Best Life, published by Men's Health, puts the city on its list of the 10 worst cities in the nation to raise a family.
Why? Crime.
"Country's highest violent-crime rate," the magazine claims.

The story continues with the obligatory comment from the mayor and of course, the city on the opposite side of the survey, which was, surprise, surprise, Honolulu.

The readers loved it and were leaving comments on the story.


When I looked at Wednesday's (May 21) home-delivered dead tree version I looked for the story on Page 1, not there. I turned to Page 3, still not there. When I got to Page 4, there it was tucked into the local headlines columns.

The new opening paragraph (called a lede) was different from the dramatic version online and the byline was dropped.

Here's the new one:

"The latest issue of the men's magazine Best Life, published by Men's Health, puts Flint on its list of the 10 worst cities in the nation in which to raise a family." The story continues on with the previous version.

Not sure what happened overnight, but someone certainly decided to give the City a little break in the morning. No one would write a lede that boring unless they didn't want anyone to read it.
Posted by Jim of L-Town at 5:33 PM No comments:

Shufflin' off to Buffalo, bye to Robyn

Time for another excursion to Buffalo, NY to help with the family. It's also time to weatherproof the wheelchair ramp I installed there about six weeks ago. So blogging will be at a minimum this weekend, but I'll try to drop in once in awhile. The housesitter is here, so I'll make this next post quick.

I'll have a lot more to say about this next matter later, because I know a lot more about this, but high class, experienced reporter Robyn turned her last shift at the Flint Journal Wednesday.

While Robyn didn't qualify for the buyout because a few years ago she left and then came back as a part-time employee she has departed after some rather crude treatment. Mind you Robyn isn't complaining to me, but most people at the paper, and many who have left, know what happened to Robyn.

So instead of having a pile of money dangled in front of her, they just treated her badly.

Later, I'll explain to you how she wanted, should have had, but was denied one of the open editor slots on the weekly side. Instead the paper has hired a couple of lightweights who have told everyone that they "are now at the helm."

I have U.S. Navy experience as a helmsman and trust me under the current leadership the U.S.S. Flint Journal is headed for the rocks and shoals. Especially when high class, experienced reporters like Robyn are pushed out the door.

But like I said, I'm headed out the door myself, so just whet your appetite for the story to come.
Robyn, in case you turn in here, you know I love you and enjoyed working with you for so many years. To kind of twist the old Bogie phrase: "We'll always have Theron Wiggins!" (Don't worry I'll explain that too!)

Robyn, enjoy the peace and quiet that comes after the Journal, enjoy that husband and kids and just know that you will be sorely missed, even if some folks don't believe it.

Oh, and one more thing, I have to give the big editor credit for one thing: He said that blogging was the wave of the future and that it could be fun. Man, was he right!
Posted by Jim of L-Town at 5:20 PM No comments:

A month ago I blogged about the shooting of Capac police chief Ray Hawks. I was acquainted with Hawks through my work at the Oakland Press and at the Flint Journal.
His family has put up a website for people to visit, leave well wishes and listen to the 911 tapes of the shooting.
Tape 4, the one where Chief Hawks is calling for help himself, is particularly moving and frightening.
Please stop by and leave a message and listen to the tapes.

The website is at: http://chiefhawks.com/
Posted by Jim of L-Town at 7:30 AM No comments:

The tall tale of the hopping raccoon 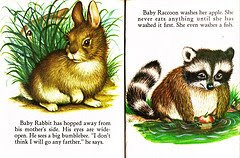 Early this morning my wife came in asking me if I knew a creature that looked like a raccoon but hopped like a rabbit.
Mind you, recently I've been getting phone calls from a "buy-out" buddy named Kim who spends his early retirement days walking around his property talking to birds.
"Hey, Jim, right now I'm looking at a yellow-throated kiwi nut hatch in my backyard, when I say 'kaloooo, kalooo' it looks at my and sings back," Kim will say excitedly into the phone.
So now on top of this insanity, my wonderful wife is spotting hopping raccoons.
At 5:45 a.m. I mustered my best sense of humor and told her it might be the rare "hopping raccoon of Michigan."
She was not amused and accused me of making fun of her. "Who me? I would never make fund of you." When I told her I was going to blog about it, she was even less amused.
But if anyone knows of a critter that hops like a rabbit, but looks like a raccoon feel free to chime in.
In the meantime, I'm going to hide the wine in the closet and hopefully, Kim will find a new job and leave the birds alone for awhile.
Posted by Jim of L-Town at 9:49 PM 1 comment:

On Sunday, Reporter Ron Fonger did a lengthy and interesting article on the case of a man, John Aslin, in prison for more than two decades on an unusual murder case. I took the attached photo of Aslin off the Michigan prison website.
As an 18-year-old the man Aslin was committing a burglary (breaking and entering as they call it in Michigan) when an elderly woman living in the home died of a heart attack caused by the fright of the burglary. Aslin was found guilty of murder and is doing life.
There is a great debate whether he has paid his debt after so long a time in prison and questions whether scaring a person to death is even murder. All-in-all a great story with passion on both sides.
I'll put a link here, but if you are reading this two weeks after I posted this, it will likely be gone.
Anyway, the story, as are all of Ron's stories, well written and researched. The writing was good, but the point I want to make is that there are literally court and crime stories like this everyday that are not being covered.
Ron's story garnered 20 comments on Sunday, which is a zillion by Flint Journal website standards. But by tomorrow morning the story will slip off the website into oblivion. A more friendly - and productive - website like the Detroit Free Press and Detroit News keeps stories receiving high traffic up front.
If reporters were freed up to spend more time in courtrooms and visiting sources in local police departments and courthouses, they would find stories like this almost everyday.
Under the old beat structure that would still be taking place, but with everyone acting as a general assignment reporter that is no longer possible.
For those of us with a fondness for newspapers, especially the ones we worked hard for in our careers, it is maddening that the powers that be can't look at their own website and see what is connecting with readers and, gasp, doing more of it.
Folks sometimes mistake the passion and frustration expressed here as a dislike of our old newspaper. Nothing could be further (or is it farther, gees I could use an editor right now) from the truth.
Many of us, especially with friends still at the paper, want the paper to succeed and thrive. When the road map is so clearly there to attract readers, it is difficult to watch the caravan headed down the wrong road toward a cliff.
Here's the link to Ron's story and the comments that followed.
http://www.mlive.com/flintjournal/index.ssf/2008/05/legal_battle_expected_over_whe.html
Posted by Jim of L-Town at 8:59 PM 9 comments: