Did I ever tell you about the winter of '44? 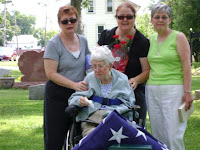 Frankly, it was more of a service than Red wanted. His desire was no service at all. This seemed contradictory coming from a man who used to serve on a local VFW Post’s honor guard. In the end, his daughters decided they needed at least a brief ceremony to help close the book for them.

The group of attendees was small, immediate family only and a captain and sergeant from the New York Army National Guard to serve as an honor guard. Red’s wife, Joan, clutched a favorite photograph of Red wearing his VFW honor guard uniform, a picture that appeared in the Buffalo News many years ago.

It was a warm, sunny day and the service started at noon. It was over by 12:10 p.m. In those ten minutes were plenty of tears and at the end a little laughter, courtesy of my mother-in-law Joan who chimed in with a comment so poignant and telling that it almost brought a small smile from the stoic Army captain who had just presented my mother-in-law Red’s burial flag.

As is tradition, even in the case of a cremation, the flag that would normally cover a casket was present and folded next to the small, metal box containing Red’s ashes. Following the playing of “Taps” the honor guard opened the folded flag and then re-folded it in front of the family.

The captain then got down on one knee and offered the flag to Joan with the traditional Army statement: “This flag is presented on behalf of a grateful nation and the United States Army as a token of appreciation for your loved one's honorable and faithful service.” (Each military branch does a slightly different statement).

As the captain’s white-gloved hand placed the flag in Joan’s lap, as she sat in her wheelchair, she put her right hand, the one not frozen by her stroke on top of the officer's hand, looked up at him and said the words that brought us to tears and laughter: “Did I ever tell you about the winter of ’44?”

Our laughter caught the Army captain slightly off guard and he successfully stifled a brief smile that started coming over his face.

So where did the question come from and why did we laugh and cry?

As I have written previously, Red joined the Army during World War II and was assigned to the Army’s 75th Division, the so-called “diaper division” owing to the young ages of its members. The Division arrived in France and was thrust into action in December 1944 in the middle of the fierce Battle of the Bulge.

It was trial by fire and it was in the most extreme circumstances and horrific weather. The Germans tried to take advantage of the miserable weather and poor conditions to push back against the Allies counter-invasion that began with D-Day.

The fierceness of the battle, the extreme cold and snow – even for a guy from Buffalo, New York – left an internal tattoo on Red’s being. The winter of 1944 is the extreme test of his life by which all other difficulties were measured.

In Red’s declining years, almost every night when he was tucked into bed by his wife Joan, he would look at her and say: “Did I ever tell you about the winter of ’44?”

It was his way of saying no matter how bad things were, they could never be as bad as they were in the winter of 1944. The young Army captain, who heard the laughter and saw the tears, could not have known the impact of Joan’s question, but we did.

My mother-in-law, who suffered a debilitating stroke in April, is living her own ‘winter of ’44.’

During this difficult time she is leaning on Red’s strength, that quiet toughness that spoke to him every day, that while life was tough, it would never be as tough as it was in that awful winter of 1944.

Red let those difficult days in the Ardennes region in Europe refine his life, not define it. It would be great if all of us could take our “winters of ‘44” and use them for strength and not for defeat.

After the honor guard left, my sister-in-law Diane read the 23rd Psalm and then Red’s wife clutched the metal box with Red’s ashes in her lap for a minute and then returned it to the stand. Red’s wife and three daughters then took turns laying four red carnations next to the box before we left the cemetery.

And just like that the service was over and we all left the cemetery. Rest in peace, Red.
Posted by Jim of L-Town at 12:31 PM

Tell me that you filled in the Captain, Jim.

Unfortunately, the captain and sergeant disappeared during the time we were reading the 23rd Psalm.

I am working with my father-in-law's nephew the funeral director to try and find their names, so that I can thank them again (I thanked them before the service) and to send them this story.

I'm told it should not be a problem to get the names.

The sergeant can, I think, be excused but I'll be really disappointed if the officer didn't understand the significance of Mrs. Red's comment. Although the war was ongoing in many different fronts -- some cold, some not -- "the winter of '44" can only mean "Bastogne and the Bulge" to the Army, imho.