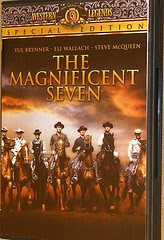 It's house cleaning day (I get to do the dusting and vacuuming - Yeah!) and I just found a great movie to watch while I do it.

"The Magnificent Seven" with Yul Brynner, Eli Wallach, Steve McQueen, Charles Bronson, Robert Vaughn, James Coburn and an actor named Brad Dexter playing the "Seven." That's enough testosterone to spontaneously start a war anywhere.
James Coburn just killed a guy and won a gun duel by throwing a knife into the heart of his opponent in what was supposed to be a gun fight. That's how he got noticed by Yul Brynner and enlisted into the Magnificent Seven. It just doesn't get any better than that.
Don't worry, my wife had her time this morning on the television watching AM Style on QVC. I think they were selling bras, matching shirt, jacket and pant outfits. So she's had her estrogen fix for today.
Besides she's working on the other parts of the house.
As long as you have to be cooped up in the house dusting and vacuuming while it is heavily snowing outside, watching a good cowboy movie is a pretty good consolation prize.
Posted by Jim of L-Town at 11:02 AM

How do you dust or vacuum while watching a movie? A DVD player attached to the vacuum? A wristwatch TV?

Better yet, does your wife have a blog where she shares the secret of getting you to vacuum or dust?

It's a well-oiled procedure (dusting and vacuuming while watching a movie).

First, I have seen the movie probably a dozen times over the years, so I pretty much know the really good spots. I dust during the good spots and the two televisions in the biggest rooms are on - a little loud - while I dust and catch a glimpse of the TV.

Then when the commercials or slow spots in the movie are on, I vacuum. It's simple, but it does take about an hour longer if I just did the vacuuming and dusting.

Now, as to how Joan got me to agree to dust and vacuum (she gets the bathrooms and kitchen to clean) it was a deal we made when our housekeeper left us to become a nurse last year (Yeah for Donette!)

When we realized that she was leaving and that I was retiring we made a decision to end the luxury of paying for a house keeper. To do that we struck a deal on what each of us would do each week to keep up on the house.

(Don't tell Joan, but I got the best end of that deal!)

If mom had a blog, i would die. But then how would she tear herself away from a good crossword puzzle to write it? In other news, I had Malaysian food for lunch and thought of you.

You did get the better part of the deal - cleaning bathrooms and kitchens are the worst.

We also gave up the housekeeper when I did the buyout. But, I must confess, my husband and daughter do the majority of the cleaning most of the time. I started cooking again :)

Joan should have a blog, and a puppy. I love my dog Taylor and when I spill something on my kitchen floor she cleans it.Get a dog!