Flint vs. Buffalo, Russert wins it for the NY city 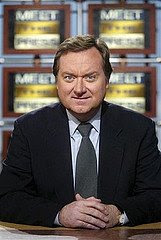 As I mentioned earlier, my wife and I arrived in Buffalo, NY about an hour after the tragic news of Tim Russert’s death.
Perhaps some of the best analysis I saw of Russert’s untimely death reflected frequently back to his Buffalo roots. The local Buffalo coverage of his death was filled with video clips of his frequent visits back to his hometown, especially the Blackthorn restaurant and bar. (This bar and restaurant is less than a mile from my wife’s parents and we have been there several times – but never when Russert was there).
The television reporters descended on the Blackthorn and everyone had a story about a Russert visit to the bar and his unpretentious manner when he was home.
There is no doubt that Tim Russert loved Buffalo, but more than that, Buffalo loved Tim Russert. His death cast a pall over the city Friday and Saturday that was palatable.
Everywhere you went, people were watching and talking about the loss of their favorite son.
In the past I have reflected on the similarity of Buffalo and Flint. Separated by Canada and 300 miles, they have so much in common it is like looking in a mirror. Whenever we have traveled to Buffalo – and that’s dozens of times – I am struck by the similarity of neighborhoods – decaying and otherwise – the loss of business, the once thriving steel business is virtually gone and the hard boiled, balled fist populations of both cities.
Nearly every block in Buffalo has a bar, restaurant or both. Not the Applebee’s, Chili’s kind of bar, but the kind you see in good, old movies. The bar built inside what was an old house. You have the feeling when the night’s over, the bartender and waitress, who are married, simply walk up the stairs to their apartment and go home.
We went to Houk’s (I think that’s how you spell it) on the lake in Hamburg Saturday. The menu outlines three generations of the same family ownership and it sports that retro 1950s linoleum that was popular then. Every restaurant has a fish fry and many carry the kummelwick sandwich I wrote about a few days ago.
The uneven linoleum floor required the use of several napkins under two table legs to keep the table from rocking back and forth and a smoking ban in all public places in New York, left us victim to healthy, cold gusts of wind as people went out on the deck to eat and smoke.
People in Buffalo have a certain appearance. I hate generalities, but Buffaloians are hardy stock. Tim Russert and Ron Jaworski with their large, round faces are the best examples I can offer right off the bat. For those who know me, I fit in perfectly.
Wolf Blitzer is a Buffalo guy, but obviously has a little different look. People are friendly, but frank and you have the feeling one wrong remark and you could be on the wrong end of a punch. The difference being that you know you would deserve the punch.
Roman Catholics, and their churches are everywhere, Tim’s family church, St. Bonaventure’s is on Seneca Street, also less than a mile from my wife’s childhood and her family’s current home. Many Catholic Buffaloians took advantage of the Saturday masses so they could watch Tim Russert at home on Sunday mornings.
It occurred to me that Tim Russert may be the difference in the public perception of Buffalo, versus the public perception of Flint.
Flint’s current most favorite son is Michael Moore. But Michael, unlike Tim Russert, does not conjure up positive images of his hometown. Really, he conjures up the opposite. Flint, for better or worse, has been defined by the lingering images of “Roger and Me.” A movie, by the way, that I like, enjoyed and thought was if not fair, at least provocative in examining what had happened to the city.
But unlike Tim Russert’s friendly sign offs and frequent shout outs to his home city, Michael Moore’s legacy was to leave Flint in ruins, no matter who is to blame.
Buffalo is in mourning because their best cheerleader, who was also a good friend, is now gone. Flint’s Michael Moore, doesn’t make those high profiled friendly visits home where he sits on a bar stool with the guys from his old neighborhood and just talk about the good ol’ days.
Some of those talking about Tim Russert at the Blackthorn remembered that Tim would often sit with his beer at the bar and just ask about “so-and-so” and what every happened to Nora Beasley, his best friend’s mother at school.
Well, on Friday night the local NBC affiliate interviewed Nora Beasley’s son, who recalled a warm little story about Tim Russert coming home to speak at a high school graduation. He was on a very short leash from NBC and was flown in from the airport by helicopter to give the speech and then be rushed back to the airport for his trip back to Washington, D.C.
When the speech was over, Nora Beasley’s son got word to Russert through a police officer that Nora was in the crowd and really wanted to see Tim. He told the helicopter to wait, waded back through the crowd until he found Nora and then stopped and visited with her for 15 minutes while an expensive helicopter waited.
It was illustrative of the love Tim Russert had for his hometown and its people, his old friends. Flint has no such friend and it shows in the kind of coverage it receives from the national media.
On Sunday, the day we left, local businesses purchased full-page ads honoring the life of Tim Russert and expressing their condolences for his death. Who in Flint today would inspire that kind of memorial?
Tim Russert was the best. Rest in Peace.
Posted by Jim of L-Town at 3:01 PM

Compare Tim Russert and Michael Moore? You might as well compare filet mignon and Spam.

Despite his wealth and fame, Russert never forgot where he came from and Buffalo never forgot him, as the events of the past couple of days show. A tough but fair journalist who prepared relentlessly for interviews, Russert was so counter to the blowdried talking heads and "gotcha" journalists prevalent today. The story wasn't him, it was the subject at hand. Watching him, he always seemed like the kind of guy you'd want to have a beer with, and the accolades this past weekend bear that out. The NBC Washington bureau he built is second to none. I think his death has hit people so hard not just because another good guy has left us too early, but because there isn't a Russert-in-waiting ready to take the reins of Meet the Press or the political coverage. Yes, life goes on, but can anybody say that the 2008 presidential election will be the same without him?

Now let's look at Michael Moore. Whether you believe GM had an obligation to keep Flint fat in factory jobs after decades of labor-management discord and Flint's odd, longstanding feeling of entitlement, "Roger & Me" was a funny exploration of how Roger Smith (a corporate dunderhead if ever there was one) took the advice of equally stupid PR people and evaded Moore, THUS HANDING HIM THE WHOLE PREMISE OF THE MOVIE.

Of course, one of the many reasons GM didn't have a use for its Flint factories was that more and more people -- including Moore -- had given up on GM vehicles designed and built with indifference and switched to imports. It was hilarious listenting to Moore self-righteously justify his own decision to drive a Honda while living in Flint, while assailing GM for boarding up plants.

After "Roger," Moore couldn't get out of his own way, so subsequent efforts did more to exploit their subjects than elevate the level of thinking. In a Michael Moore treatment, everything is about Michael Moore. In "Bowling for Columbine," he had an opportunity to add perspective on balancing gun ownership and gun control but instead went for the Cheap Shot. In one of those "gotcha" interviews Russert never would have done, he skewered Charton Heston, who probably was in the early stages of the Alzheimer's that killed him. Moore edited the footage to make it look like Heston was some racist gun nut, when Heston was actually an early civil rights advocate. Notice that the Hollywood "elite" doesn't spend a lot of time looking for photo opps with Moore?

With his N.Y. apartment and his giant place on Torch Lake (on the historically tonier side of the state), it seems Moore has become the kind of fat cat he used to rail against. He ignited his fortune by accusing GM of forgetting about its roots in Flint. Now Flint might ask the same of Michael Moore.