The anatomy of a story not told 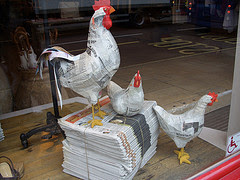 Congratulations to our local ABC affiliate - WJRT-12 - here in Flint for finally telling the story that could have been told by the Flint Journal last summer.


How do I know this? Because it was my story on a major mortgage scam that couldn't get by the top editors and lawyers at the Flint Journal. The reason: Fear of legal action.

My wife and I spent a romantic Friday night (on my own time and on our way home from dinner) driving slowly through the subdivision to make sure I had not missed any of the properties. With my wife's help we logged which homes were occupied, which were vacant, which were for sale and which were falling into disrepair.

I spent hours on the phone with Township Supervisor Kurt Soper, township building inspector Randy Stewart and many of the residents who were living or acquainted with the subdivision and its failings. Only two people would speak for the record out of fear of becoming a target themselves. The point being, the Journal had a significant investment in time, mileage and effort in this story.

The ABC story (see link below) has no more information than I had in August. Yes, the banks have finally filed a major lawsuit, but the reason my story was held was that Kurt Heintz refused to talk to me. His refusal to comment on a massive mortgage fraud was the reason cited to me why we couldn't go with the story. Forget that I confronted him at his front door after going to his former office and finding it closed.

Finding him was no small feat. After I found his office closed I went to his home address and found a bank security guard on duty keeping anyone from coming on the property. I did learn that the property had been seized by a bank (the one named in the Channel 12 story), but I didn't stop there.

I went next door and a nice neighbor pointed down the street to the rented home where Mr. Heintz was living and told me he was there at that time. That's when I drove down, talked to a young boy who brought Mr. Heintz to the door where he denied who he was. When I couldn't get him to admit who he was I left a business card so "Mr. Heintz" could call me later. Which, of course, he never did. This, by the way, is the same house where the stabbing occurred just a few months later.


Then the Journal's lawyers and top editor got involved and the story fell into a journalism black hole.


In the ensuing months, Heintz's wife was stabbed by an angry investor (trust me there are dozens of them as well as banks). But in August I had all the documents we needed to show a really massive fraud. Houses assessed at three times what they were worth. Dozens of homes in a high class subdivision in Davison Township standing empty and in foreclosure. But even with all the evidence, township and county documents, I could not get this story in the paper. I even had a better comment than Channel 12 from the FBI. At least I got them to confirm they were looking at the mortgage irregularities in the subdivision. I had plenty of background confirmation of what was going on as well.
So a month into my retirement I got a call from a Journal reporter - after the stabbing - asking me for all my information so they could NOW do a story on the whole mess. Unfortunately, I turned over all the documents to another reporter and frankly, was ticked off enough that I really didn't want to help. "Why would they want to run the story now with the same information I had in August?," I asked.

The next day they ran a weak follow, still not using all the documentation I had gathered.

By the way, when the Channel 12 reporter went to Heintz's door to get a comment, he got nothing as well. But at least the station went ahead with the story anyway.

The watered down story that finally appeared in the Journal was a pathetic recounting of neighbors complaints about high weeds and rotting homes and how the Township had failed to resolve their complaints. There was a passing reference to an investigation, but nothing about Heintz, his mortgage company or the massively inflated mortgages.

It was akin to an 1865 newspaper running a review of the Ford Theater play "Our American Cousin" and then mentioning in passing that President Abraham Lincoln was assassinated before the intermission.

Trust me, the neighbors and officials I had worked with over a month's time were stunned that the Journal did not see, or was not brave enough to tell the story last summer.

Want to know why some newspapers are failing? They are chicken.

I don't know how long it will be up, but here's the link to the Channel 12 story:

Once again, the Flint Journal's editors prove the old axiom for second- and third-rate newspapers: Get the big story, just don't get it first.
As one of the newspaper's former employees who took the buyout, I can attest to Jim's statement about his having researched, prepared and written the story of the federal investigation into the mortgage fraud case, only to have it's main point gutted from the piece that ran.
Like Channel 12, Journal reporters have been hearing and seeing bits and pieces of this story emerging for months, going back well into last year. Unlike Channel 12, the Journal wouldn't report it was going on, despite the fact the FBI said it was and despite the fact Jim had the story sewn up.
You know how often the feds admit on the record to local media outlets the subject of a major ongoing investigation? Oh, about once in a blue moon. For them to do so meant they wanted it out there that this matter was being looked at hard. Not only that, the Journal has known for months that Channel 12 was actively working on this story.
One would think that given these factors, this ongoing investigation of mortgage fraud in Genesee County would have that was a major news story for the paper -- that is, unless one had dealt with the guys who run the Journal's newsroom. They think its great to pursue abig story like that, once someone else has broken it first. For whatever reason, they think it's safer that way.
It's another example of how management of the Journal's news operation continues to marginalize the paper's significance to readers. Others include the death of beat reporting at the Journal, which fundamentally cuts off the reporting staff from getting important news stories from the community.
` Then there's the time-wasting, space-wasting requirement that Journal stories have what a mouth-breather in the newsroom calls "real people," an idea stolen from the much hated Gannett 2000 playbook that I don't think even those guys use anymore. It mandates that reporters must get useless, uniformed quotes from some shmoe off the street who knows nothing more about the topic at hand than a houseplant,
Obviously there are times when comments from a neighborhood resident or voters have a place in a story. But when you ask some moke at the mall about how he feels about the new state police training academy class (as the paper did not long ago) you are wasting the readers' time and contributing nothing to his and her understanding of an issue.
And there's the continuing practice of assigning and requiring a steady stream of features from reporters, stories that don't have big time elements, in place of hard news stories that really matter. That allow the managers to plan the paper's layout and content days if not weeks and months in advance, but it kind of keeps the content of actual news down. How much news is your Sunday newspaper going to have in it if the editors are planning their Sunday content months in advance?
An ex-veteran TV reporter recently told me that from his time on the street in the not so distant past that the news directors of the local stations wouldn't think of missing the Journal because it was essential to know what was going on to shape their newscasts. But today? Eh, not so much.
The Journal editors continue to forget that the first four letters of the word newspaper are n-e-w-s.

A former Journal scribe who many years ago traded journalism for law said: "You never know where you'll find a front-page story in the Flint Journal."

Now, it seems, there are more and more front-page stories NOT in the Flint Journal. And here I thought TV was supposed to be the shallow and vapid news medium.

Thats really sad to think that the Journal got scooped by TV "news". At least their comics are still pretty good.