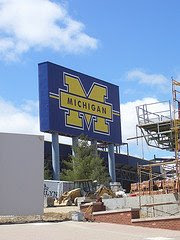 Wow! Two great Michigan games today. First MSU and then a real stunner with U-M coming back from a 19-0 third quarter deficit to win at the end.

Fans were booing the Wolverines at the end of the first half, but, not surprisingly, were cheering wildly as the team pulled it out at the end.
I think it's great that Michigan could have two great contenders in the Big 10 this year. Of course, I'm rooting for the Spartans to win the cross-state rivalry game Oct. 25. Looks like I'll have to watch it from Buffalo, NY, this year.
The Lions are on a bye week, so nothing to wreck the great mood either. A friend and I are going to the Detroit Red Wings exhibition game against the Atlanta Thrashers. One of the Thrashers, Jimmy Slater, is a local Lapeer guy and we both know his Dad, so wouldn't mind seeing Jimmy have a good game tomorrow night.
Posted by Jim of L-Town at 10:03 PM No comments: 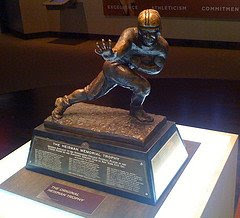 Great job today by the MSU Spartans. This is a game they would have lost in the past. MSU over the Indiana Hoosiers by a 42-29 score.

Javon Ringer looks like a legit Heisman Trophy candidate too! This kid gets stronger as the game goes on. He only ran for 198 yards today, first time in three weeks he didn't go over 200 yards.
Brass Spittoon is ours again!
Posted by Jim of L-Town at 3:38 PM No comments:

The lack of clarity by two Presidential candidates on the current economic crisis or what they would do about it was the most startling aspect of last night's debate.

As one who believes that more voices, not less, should be involved in the election debates I would just call your attention to the specific actions that Ralph Nader would take in the current crisis. Of course, his voice was not allowed in the debate.

It is my belief that the two-party system has resulted in one-bureaucracy rule in Washington, D.C. As futile as it seems there needs to be more independent voices in our country. Bot the main parties are addicted to pork barrel projects and narrow self-interest.

Whoever wins this election nothing will really change (even though both say they are running for just that). The big money will continue to control who does what in Washington. Two-party rule, in my humble opinion, is slowly eroding this country.

What would it hurt to invite a couple third, and fourth party candidates, to the debates.
Posted by Jim of L-Town at 11:17 AM No comments:

I asked a few days ago the famous question of a former Lions' coach: "What does a guy have to do to get fired around here?"

Millen got the answer, when the team's owner is publicly called out by his son in the media, I guess that's what'll get you fired.

The problem is that Matt has left the tool box pretty empty. We have Roy Williams, Calvin Johnson, Jason Hanson and, well, we have those three.

All we need now is an offensive line, defensive players who can tackle and a quarterback who can throw. That's about it. For those of us who have tried to stick with this team (I'm off the band wagon now) we have watched individually great players - Barry Sanders, to name one - play their entire careers here without ever making the playoffs, or making it one time.

Firing coaches, general managers and players hasn't really translated into a better team in the past so I'm not holding my breath now.
Posted by Jim of L-Town at 4:14 PM No comments:

With all the talk of financial disaster in the news, I just have to get this off my chest.

Starting about six years ago, my wife and I used to listen to David Hall on WJR-AM radio here in Detroit on our way to church.

Mr. Hall operated and ran a company called Rock Financial and his radio show was simply one big, long advertisement for his company.

People would call in with questions about mortgages and David Hall would provide some amazing advice.

You'll have to take my word on this, but six years ago my wife and I used to shake our heads and wonder how this could work. On one Sunday, I even offered my uneducated opinion that this whole thing "would end badly for a lot of people."

The fact that people were buying houses they couldn't afford, for mortgages they temporarily could seemed like a recipe for disaster. But what did I know, I'm just a guy who can barely balance a checkbook.

So my question is this. If a dummy like me can see this coming six years before it happened, how come all these political and financial geniuses who make a living at this apparently didn't see this coming until Monday and now they have to fix it by Friday.

And how are they going to fix it? They're going to make me pay for it. Even though I bought and paid for a house I could afford, didn't refinance my house to make a quick buck and already pay outrageous taxes, I have to help bail out companies and people who conspired to get a deal that was too good to be true. People without a dollar in the bank were allowed to buy nice homes for little money. Yeah, that's a good idea.

It makes me very mad. And I blame Republicans and I blame Democrats. They both have dirty hands in this and that's why they are eager to fashion a quick, bipartisan solution so we don't ask too many questions about how we got here. Obama and McCain are leaning on advisers who are waist deep in this sewage.

Fannie Mae and Freddie Mac bought and paid for a lot of legislators, on both sides, and now they're scrambling to cover their tracks. If one of those crooked executives get an extra buck out of this, count me out of the deal.

Ralph Nader is looking better by the moment.
Posted by Jim of L-Town at 9:36 PM 5 comments:

You can't blame Flint Journal staffers for being a little confused this week.

Two weeks ago they were told that a new round of buyouts are coming in October and some have even been called in and told it was probably time for them to take the buyouts and seek new employment. That sounds pretty definitive to me.

But then late last week, the Publisher in a couple of stand-up meetings, said no decisions have been made on any new buyouts or downsizing. The Publisher also denied any pending plans to shut down the press or to consolidate editing or reporting activities.

It's hard to imagine that the editor made up the buyouts or other information out of thin air and if he was honest enough to answer staff questions with what he knew, good for him.

If the Publisher is trying to limit damage from the early release with his "no decisions" comments when the reality is otherwise. Shame on him.

We know one thing. It can't be both ways. Either there is a new buyout plan coming or there is not one. Someone is not being honest.
Posted by Jim of L-Town at 7:10 AM 10 comments: 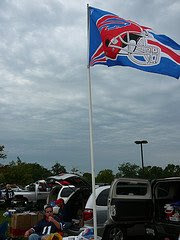 My new team, the Buffalo Bills, pulled one out with a field goal at the end of the game. 3-0 on the season.

The Spartans did a pretty effective number on Notre Dame yesterday.

Just tuned into the Lions and they are down 21-3 in the first half. You know, I could make a pretty good comparison between the effectiveness of Matt Millen and some editors I know, but I won't.

Marinelli has to be asking him the question another Detroit Lions coach asked about a dozen years ago: "What does a guy have to do to get fired around here."

(Update Monday morning: In the Millen era the Lions are now 8-50 in road games. It would take more than five years of 8-0 road victories to erase that deficit. Come on Mr. Ford, time for Millen to go!)