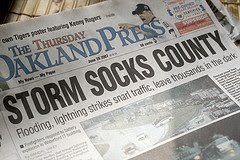 An interesting video sidebar to the death of newspapers stories......
http://www.jossip.com/massive-newspaper-layoffs-are-killing-the-journo-bar-scene-20080318/
Back in my Oakland Press days in Pontiac, Michigan we used to eat lunch at a restaurant across the street from the paper. "Sid's," which was owned and run by a guy named Jim, served fresh turkey sandwiches with a dose of down home insults.
Jim kept the "Sid's" name because he didn't want to waste money on a new sign.
The family run restaurant was convenient and usually quick for lunch and occassionally our old publisher would stop in for lunch as well.
On several occassions the publisher would ask to sit with us and because he was a well-heeled individual we at first believed we might get our $3.78 lunch tab picked up by the boss.
Wrong! At the end of the lunch, the publisher, a good ol' Scotsman, divvied up the bills and made sure he didn't pay a penny more than his due. He was the same guy who stood in line to get free house paint from the city during a giveaway in the 1970s.
At that time the newspaper motto, which was prominently displayed on its building sign was: "Delivered to a doorstep near you." Which if you really think about it was a stupid slogan because most people want the paper delivered to "their" very own doorstep.
But as bad as the old publisher was, times have fallen hard on the Oakland Press, as it has on so many papers.
In recent years, the ownership has bought out, laid off or otherwise decimated the ranks of its editors and reporters.
One longtime employee and editor, and a friend of mine, was fired long distance by phone while he and his wife were on vacation. Nice touch, eh?
Another favorite OP co-worker and friend, Jean Saile, gave me sage advice, which I should have, but didn't take.
"Jim," Jean said to me. "A reporter should write for five years and then quit and go onto something else. After five years you will have covered every imaginable story and after that you will simply be telling the same stories over and over."
Although I didn't realize it at the time, that was so true.
The Oakland County news beat was an active one, with plenty of competition from Detroit newspapers and televisions stations. It was a fun place to cover the news, even if it was not very profitable.
But like so many other news organizations, the Oakland Press was swallowed up by a media money machine that was only content when it gutted the operation to maximize its profits.
It's a familiar story, no?
Posted by Jim of L-Town at 9:09 AM 2 comments: 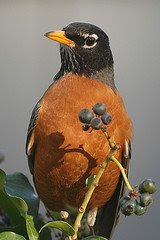 The sky is blue, the air is clear - if still a little chilly - but the promise of Spring is here.

At least as far as the calendar is concerned. So bring on that global warming I'm ready for a little sun and warmth.
I'm not going to blog tomorrow - Good Friday - and through Easter. Please join me in recalling the sacrifice and gift given to us through Jesus. Anything good in my life comes from him, that other stuff I do I do to myself.
May God bless you all. See you Monday.
Posted by Jim of L-Town at 8:43 AM 1 comment:

Beata Mostafavi, an excellent reporter and writer at the Flint Journal did a nice five-year local war wrap-up in today's paper.
Don't know how much time she had to put it together, but the pictures and balance in the story were first rate. A quick, but accurate portrait of where we are on the Iraq War today.

Here's the link, which I'm not sure will last too long:

The "Maverick" owner Mark Cuban weighs in with an interesting issue involving the brave new world of newspaper bloggers:

And then there's also these from newspaperdeathwatch.com:

Not everyone shares in the pain:

And here is WGN (Chicago) making a little fun of Sam Zell's new ownership of the Tribune Corp.:
http://www.edpadgett.com/blog/2008/03/wgn-weatherman-flips-out-i-own-this.html
Posted by Jim of L-Town at 1:15 PM No comments:

Keep it up Gabe!

Even though the Flint Journal blew off the story I was working on last summer related to a huge mortgage scam, ABC 12 has continued to pursue it and it looks to be a huge story. Here's the link to their latest coverage:

Here's what happened to the story I was working on last July and August when this was really coming apart:

Notice that not even now has anyone gotten a comment from the Heintz's the supposed reason my story could not be published as originally written in August.

Is there any wonder the public is disillusioned with its news media?

Is a newspaper collapse imminent?

Here's someone who thinks the death of newspapers is at hand:

It's hard for people like me to imagine a world without the traditional newspaper, but then my great-great grandparents could hardly imagine a world where a horse was simply a hobby and not a necessity.

Someday, maybe soon, newspapers will exist only in memory or as specialty publications aimed at very narrow topics or specific regions.

My question has been for the past few years is why the existing newspapers, which still attract a fairly large contingent of loyal, if older, readers seems hell bent to divest itself of even those folks.

A longtime reader, Gracie, of Davison, ran into me at a function in February and said she was disappointed she could no longer read my articles. Then she added at least she could still read Kim's articles. When I told her that Kim too was leaving the paper, she burst into tears.

Current newspaper management minimizes the connection that readers, especially the long time loyal ones, have with the writers. Now Gracie, who is in her 70s, didn't cry when I left, but she loved reading Kim's features and would look for his byline each day. She would often call him and talk to him about the stories he had written and the ones she hoped he would look into.

Gracie then noted that the cost of the paper had been jacked up by 25 cents a day at the same time the staff was being eviscerated. In addition, reader friendly features, like wedding and anniversary photos and announcements, which were once free, now come with a price tag.

Large coverage areas like Lapeer and Shiawassee counties are now basically uncovered except as time allows in an overwhelmed reporter's schedule. So it appears that the newspaper is prepared to write off large geographic areas from regular coverage.

This is in contrast to what the staff was told at the time of the buyouts when it was proudly announced that everything we have been doing, we would continue to do. That simply has not turned out to be true.

Don't blame the reporters, there are too few of them and they are stretched far too thin to do any meaningful beat reporting (see previous article).

On the flip side, the newspaper provides for free most of its articles online and sometimes two, three or more days ahead of when they appear in the home delivered newspaper.

The newspaper's financial support base is now secondary to the consumers of its free more immediate product. That's a business model that just doesn't make sense. At least to me.
Posted by Jim of L-Town at 8:44 AM No comments: